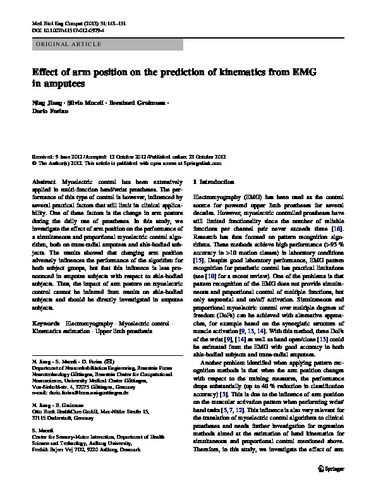 Myoelectric control has been extensively applied in multi-function hand/wrist prostheses. The performance of this type of control is however, influenced by several practical factors that still limit its clinical applicability. One of these factors is the change in arm posture during the daily use of prostheses. In this study, we investigate the effect of arm position on the performance of a simultaneous and proportional myoelectric control algorithm, both on trans-radial amputees and able-bodied subjects. The results showed that changing arm position adversely influences the performance of the algorithm for both subject groups, but that this influence is less pronounced in amputee subjects with respect to able-bodied subjects. Thus, the impact of arm posture on myoelectric control cannot be inferred from results on able-bodied subjects and should be directly investigated in amputee subjects.