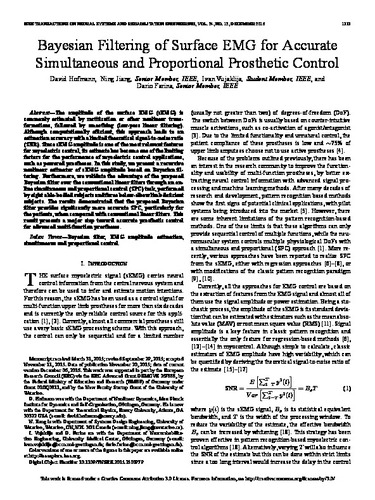 The amplitude of the surface EMG (sEMG) is commonly estimated by rectification or other nonlinear transformations, followed by smoothing (low-pass linear filtering). Although computationally efficient, this approach leads to an estimation accuracy with a limited theoretical signal-to-noise ratio (SNR). Since sEMG amplitude is one of the most relevant features for myoelectric control, its estimate has become one of the limiting factors for the performance of myoelectric control applications, such as powered prostheses. In this study, we present a recursive nonlinear estimator of sEMG amplitude based on Bayesian filtering. Furthermore, we validate the advantage of the proposed Bayesian filter over the conventional linear filters through an online simultaneous and proportional control (SPC) task, performed by eight able-bodied subjects and three below-elbow limb deficient subjects. The results demonstrated that the proposed Bayesian filter provides significantly more accurate SPC, particularly for the patients, when compared with conventional linear filters. This result presents a major step toward accurate prosthetic control for advanced multi-function prostheses.