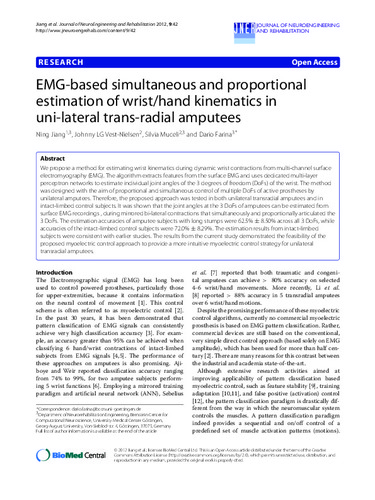 We propose a method for estimating wrist kinematics during dynamic wrist contractions from multi-channel surface electromyography (EMG). The algorithm extracts features from the surface EMG and uses dedicated multi-layer perceptron networks to estimate individual joint angles of the 3 degrees of freedom (DoFs) of the wrist. The method was designed with the aim of proportional and simultaneous control of multiple DoFs of active prostheses by unilateral amputees. Therefore, the proposed approach was tested in both unilateral transradial amputees and in intact-limbed control subjects. It was shown that the joint angles at the 3 DoFs of amputees can be estimated from surface EMG recordings, during mirrored bi-lateral contractions that simultaneously and proportionally articulated the 3 DoFs. The estimation accuracies of amputee subjects with long stumps were 62.5% +/- 8.50% across all 3 DoFs, while accuracies of the intact-limbed control subjects were 72.0% +/- 8.29%. The estimation results from intact-limbed subjects were consistent with earlier studies. The results from the current study demonstrated the feasibility of the proposed myoelectric control approach to provide a more intuitive myoelectric control strategy for unilateral transradial amputees.