Factors of Influence on the Performance of a Short-Latency Non-Invasive Brain Switch: Evidence in Healthy Individuals and Implication for Motor Function Rehabilitation 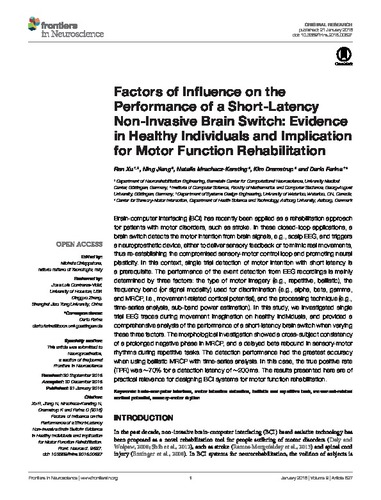 Brain computer interfacing (BCI) has recently been applied as a rehabilitation approach for patients with motor disorders, such as stroke. In these closed-loop applications, a brain switch detects the motor intention from brain signals, e.g., scalp EEG, and triggers a neuroprosthetic device, either to deliver sensory feedback or to mimic real movements, thus re-establishing the compromised sensory motor control loop and promoting neural plasticity. In this context, single trial detection of motor intention with short latency is a prerequisite. The performance of the event detection from EEG recordings is mainly determined by three factors: the type of motor imagery (e.g., repetitive, ballistic), the frequency band (or signal modality) used for discrimination (e.g., alpha, beta, gamma, and MRCP, i.e., movement-related cortical potential), and the processing technique (e.g., time-series analysis, sub-band power estimation). In this study, we investigated single trial EEG traces during movement imagination on healthy individuals, and provided a comprehensive analysis of the performance of a short-latency brain switch when varying these three factors. The morphological investigation showed a cross-subject consistency of a prolonged negative phase in MRCP, and a delayed beta rebound in sensory-motor rhythms during repetitive tasks. The detection performance had the greatest accuracy when using ballistic MRCP with time-series analysis. In this case, the true positive rate (TPR) was similar to 70% for a detection latency of similar to 200 ms. The results presented here are of practical relevance for designing BCI systems for motor function rehabilitation.