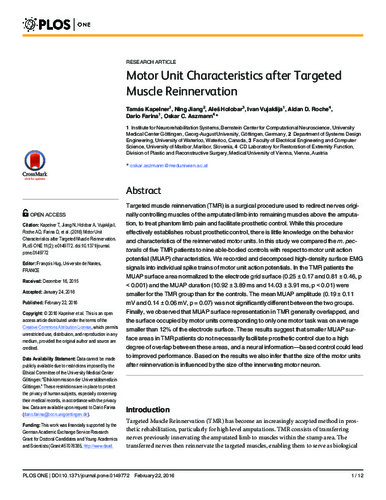 Targeted muscle reinnervation (TMR) is a surgical procedure used to redirect nerves originally controlling muscles of the amputated limb into remaining muscles above the amputation, to treat phantom limb pain and facilitate prosthetic control. While this procedure effectively establishes robust prosthetic control, there is little knowledge on the behavior and characteristics of the reinnervated motor units. In this study we compared the m. pectoralis of five TMR patients to nine able-bodied controls with respect to motor unit action potential (MUAP) characteristics. We recorded and decomposed high-density surface EMG signals into individual spike trains of motor unit action potentials. In the TMR patients the MUAP surface area normalized to the electrode grid surface (0.25 +/- 0.17 and 0.81 +/- 0.46, p < 0.001) and the MUAP duration (10.92 +/- 3.89 ms and 14.03 +/- 3.91 ms, p < 0.01) were smaller for the TMR group than for the controls. The mean MUAP amplitude (0.19 +/- 0.11 mV and 0.14 +/- 0.06 mV, p = 0.07) was not significantly different between the two groups. Finally, we observed that MUAP surface representation in TMR generally overlapped, and the surface occupied by motor units corresponding to only one motor task was on average smaller than 12% of the electrode surface. These results suggest that smaller MUAP surface areas in TMR patients do not necessarily facilitate prosthetic control due to a high degree of overlap between these areas, and a neural information-based control could lead to improved performance. Based on the results we also infer that the size of the motor units after reinnervation is influenced by the size of the innervating motor neuron.