Two centuries of nitrogen dynamics: Legacy sources and sinks in the Mississippi and Susquehanna River Basins 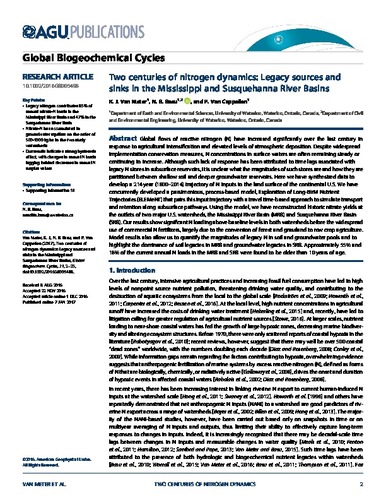 Global flows of reactive nitrogen (N) have increased significantly over the last century in response to agricultural intensification and elevated levels of atmospheric deposition. Despite widespread implementation conservation measures, N concentrations in surface waters are often remaining steady or continuing to increase. Although such lack of response has been attributed to time lags associated with legacy N stores in subsurface reservoirs, it is unclear what the magnitudes of such stores are and how they are partitioned between shallow soil and deeper groundwater reservoirs. Here we have synthesized data to develop a 214year (1800-2014) trajectory of N inputs to the land surface of the continental U.S. We have concurrently developed a parsimonious, process-based model, Exploration of Long-tErM Nutrient Trajectories (ELEMeNT) that pairs this input trajectory with a travel time-based approach to simulate transport and retention along subsurface pathways. Using the model, we have reconstructed historic nitrate yields at the outlets of two major U.S. watersheds, the Mississippi River Basin (MRB) and Susquehanna River Basin (SRB). Our results show significant N loading above baseline levels in both watersheds before the widespread use of commercial N fertilizers, largely due to the conversion of forest and grassland to row crop agriculture. Model results also allow us to quantify the magnitudes of legacy N in soil and groundwater pools and to highlight the dominance of soil legacies in MRB and groundwater legacies in SRB. Approximately 55% and 18% of the current annual N loads in the MRB and SRB were found to be older than 10years of age.