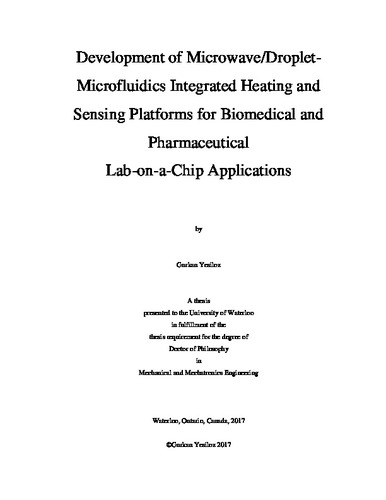 Interest in Lab-on-a-chip and droplet-based microfluidics has grown recently because of their promise to facilitate a broad range of scientific research and biological/chemical processes such as cell analysis, DNA hybridization, drug screening and diagnostics. Major advantages of droplet-based microfluidics versus traditional bioassays include its capability to provide highly monodispersed, well-isolated environment for reactions with magnitude higher throughput (i.e. kHz) than traditional high throughput systems, as well as its low reagent consumption and elimination of cross contamination. Major functions required for deploying droplet microfluidics include droplet generation, merging, sorting, splitting, trapping, sensing, heating and storing, among which sensing and heating of individual droplets remain great challenges and demand for new technology. This thesis focuses on developing novel microwave technology that can be integrated with droplet-based microfluidic platforms to address these challenges. This thesis is structured to consider both fundamentals and applications of microwave sensing and heating of individual droplets very broadly. It starts with developing a label-free, sensitive, inexpensive and portable microwave system that can be integrated with microfluidic platforms for detection and content sensing of individual droplets for high-throughput applications. This is, indeed, important since most droplet-based microfluidic studies rely on optical imaging, which usually requires expensive and bulky systems, the use of fluorescent dyes and exhaustive post-imaging analysis. Although electrical detection systems can be made inexpensive, label-free and portable, most of them usually work at low frequencies, which limits their applications to fast moving droplets. The developed microwave circuitry is inexpensive due to the use of off-the-shelf components, and is compact and capable of detecting droplet presence at kHz rates and droplet content sensing of biological materials such as penicillin antibiotic, fetal bovine serum solutions and variations in a drug compound concentration (e.g., for Alzheimer’s Disease). Subsequently, a numerical model is developed based on which parametrical analysis is performed in order to understand better the sensing and heating performance of the integrated platform. Specifically, the microwave resonator structure, which operates at GHz frequency affecting sensing performance significantly, and the dielectric properties of the microfluidic chip components that highly influence the internal electromagnetic field and energy dissipation, are studied systematically for their effects on sensing and heating efficiency. The results provide important findings and understanding on the integrated device operation and optimization strategies. Next, driven by the need for on-demand, rapid mixing inside droplets in many applications such as biochemical assays and material synthesis, a microwave-based microfluidic mixer is developed. Rapid mixing in droplets can be achieved within each half of the droplet, but not the entire droplet. Cross-center mixing is still dominated by diffusion. In this project, the microwave mixer, which works essentially as a resonator, accumulates an intensive, nonuniform electromagnetic field into a spiral capacitive gap (around 200 μm) over which a microchannel is aligned. As droplets pass by the gap region, they receive spatially non-uniform energy and thus have non-uniform temperature distribution, which induces non-uniform Marangoni stresses on the interface and thus three-dimensional (3D) chaotic motion inside the droplet. The 3D chaotic motion inside the droplet enables fast mixing within the entire droplet. The mixing efficiency is evaluated by varying the applied power, droplet length and fluid viscosity. In spite of various existing thermometry methods for microfluidic applications, it remains challenging to measure the temperature of individual fast moving droplets because they do not allow sufficient exposure time demanded by both fluorescence based techniques and resistance temperature detectors. A microwave thermometry method is thus developed here, which relies on correlating fluid temperature with the resonance frequency and the reflection coefficient of the microwave sensor, based on the fact that liquid permittivity is a function of temperature. It is demonstrated that the sensor can detect the temperature of individual droplets with ±1.2 °C accuracy. At the final part of the thesis, I extend my platform technology further to applications such as disease diagnosis and drug delivery. First, I develop a microfluidic chip for controlled synthesis of poly (acrylamide-co-sodium acrylate) copolymer hydrogel microparticles whose structure varies with temperature, chemical composition and pH values. This project investigates the effects of monomer compositions and cross-linker concentrations on the swelling ratio. The results are validated through the Fourier transform infrared spectra (FTIR), SEM and swelling test. Second, a preliminary study on DNA hybridization detection through microwave sensors for disease diagnosis is conducted. Gold sensors and biological protocols of DNA hybridization event are explored. The event of DNA hybridization with the immobilized thiol-modified ss-DNA oligos and complimentary DNA (c-DNA) are monitored. The results are promising, and suggests that microwave integrated Lab-on-a-chip platforms can perform disease diagnosis studies.