Embracing or Not Enclosing 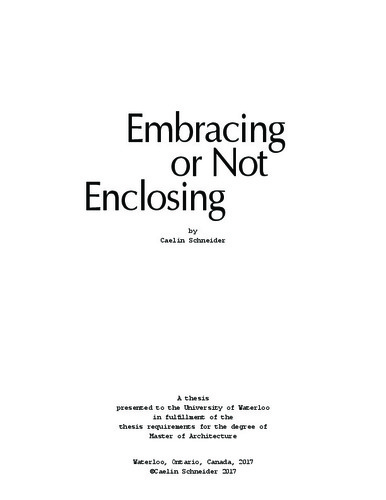 "The simultaneously archaic and hypermodern “archetypal fact” of twenty first century architecture and urbanism will be the enclosure, the wall, the barrier, the gate, the fence, the fortress." -Lieven De Cauter, The Capsular Civilization. "I no longer know what there is behind the wall, I no longer know there is a wall, I no longer know this wall is a wall, I no longer know what a wall is. I no longer know that in my apartment there are walls, and that if there weren’t any walls, there would be no apartment." -Georges Perec, “The Apartment.” Reflecting on the parallel between displaced towns in France during World War II and the cultural condition of an average Westerner today, Nicolas Bourriaud states: “Culture today essentially constitutes a mobile entity, unconnected to any soil.” Through the processes of ‘Modernism’ and then ‘Postmodernism,’ globalization has brought the world ‘closer’ together through an expansion of capitalism, often under the guise of democracy and equality. The ceaseless progress of neoliberal globalization and its parallel of Postmodernism promised a horizontality and a recognition of the other that had been conventionally repressed and pushed away by Modernism. Yet the shimmer of those promises has long faded away. From globalization’s subsumption of uniform interiors to contemporary society’s evolution into what Lieven De Cauter calls a “Capsular Civilization.” Here the everyday reality clearly aligns with Michael Hardt and Antonio Negri’s prescription of an illusion of continuous, uniform space, which is in fact densely crossed by divisions. Emerging out of this context, this thesis investigates architecture’s role in the production of new inside-outsides which therefore entangles it in the processes of control, regulation, division and connection that result from the contemporary multiplication of boundaries. The partitioning of the world that is so often delegated to architects to act out is never neutral, and the regulation of the transmission between the exterior and interior of these partitioned capsules can be seen as manifestations of Hardt and Negri’s ‘New Segmentations,’ wherein architecture acts to reproduce these contiguous centers and peripheries among the interactions of daily life. The work of this thesis takes the inherited site of the Waterloo School of Architecture as an area for questioning the structures that reduce our relations to what is outside. The research investigates the found technologies used to support and structure the conditions of access: the locked door, the camera, the window and the wall, and looks to provide a text and a series of artifacts which subvert these identified forces, in a desire to think something other than the division of inside/outside, self/other; to search for new stories of the interior.