Welcome to the web: The online community of GeoCities during the early years of the World Wide Web 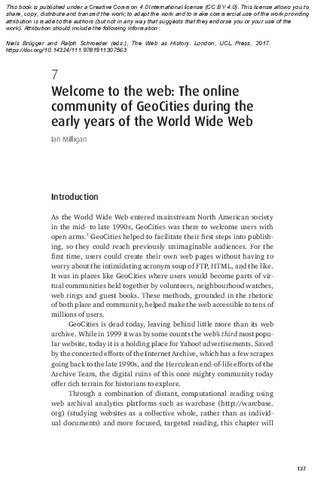 As the World Wide Web entered mainstream North American society in the mid-to late 1990s, GeoCities was there to welcome users with open arms. GeoCities helped to facilitate their first steps into publishing, so they could reach previously unimaginable audiences. For the first time, users could create their own web pages without having to worry about the intimidating acronym soup of FTP, HTML, and the like. It was in places like GeoCities where users would become parts of virtual communities held together by volunteers, neighbourhood watches, web rings and guest books. These methods, grounded in the rhetoric of both place and community, helped make the web accessible to tens of millions of users. GeoCities is dead today, leaving behind little more than its web archive. While in 1999 it was by some counts the web’s third most popular website, today it is a holding place for Yahoo! advertisements. Saved by the concerted efforts of the Internet Archive, which has a few scrapes going back to the late 1990s, and the Herculean end-of-life efforts of the Archive Team, the digital ruins of this once mighty community today offer rich terrain for historians to explore.Through a combination of distant, computational reading using web archival analytics platforms such as warcbase (http://warcbase.org) (studying websites as a collective whole, rather than as individual documents) and more focused, targeted reading, this chapter will address the charge, put forward by several scholars (discussed later in this chapter), that GeoCities was nothing more than an unconnected assemblage of places. I explore what we can learn as we virtually stroll GeoCities’ now ghostly ‘streets’ and ‘avenues’, from the child-focused Enchanted Forest to the festive Bourbon Street. Here, many early web users teased out their relationship with the web, building a foundation for the blogging and social networking explosion that would take place in the new millennium. Together they built a vibrant, interconnected virtual city.