Binocular Adaptation to +2 D Lenses in Myopic and Emmetropic Children: 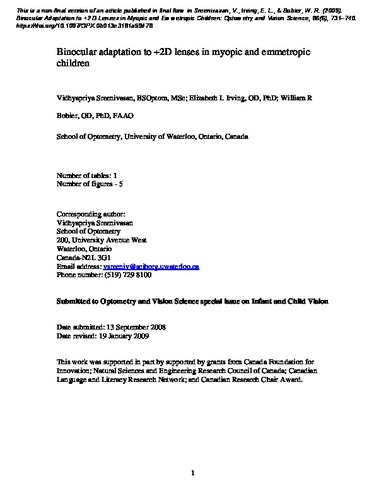 Purpose. To compare vergence adaptation to +2 D addition lenses in myopic and emmetropic children and to evaluate the influence of the accommodative-vergence crosslink (AC/A ratio) on this adaptation. Methods. Nine myopic and 11 emmetropic children fixated a near target at a distance of 33 cm. Measures of binocular and monocular accommodation and phoria were obtained during a 20-min near task with and without +2 D lenses. Response AC/A ratios were determined from the experimental results. Vergence adaptation was quantified by the magnitude of reduction in phoria and the percentage of completeness (PC, return of adapted phoria to habitual level) after the near task. Results. Myopic children showed significantly higher AC/A ratios, which led to greater lens-induced exophoria and a greater demand for vergence adaptation. Both refractive groups showed significant vergence adaptation; however, myopes exhibited significantly reduced (p < 0.01) magnitudes compared with emmetropes (myopes = 3.95 ± 0.15 Δ; emmetropes = 4.41 ± 0.08 Δ). The mean PC was also significantly (p < 0.001) reduced in myopes (61.02 ± 1.57) compared with emmetropes (76.6 ± 2.10). There was a significant correlation between magnitude of adaptation and AC/A in both the refractive groups; however, myopes consistently showed reduced magnitudes compared to emmetropes. AC/A ratio influenced PC in emmetropic but not myopic children. In the accommodation system, +2 D lenses eliminated the accommodative lags observed in myopic children during natural viewing conditions. These lenses resulted in a small over-focus (−0.24 ± 0.27 D) at the onset of near work, which decreased during sustained viewing through the near add. Conclusions. Myopic children demonstrate reduced magnitude and completeness of vergence adaptation to +2 D lenses. The magnitude of vergence adaptation varied with AC/A in both refractive groups; however, the presence of myopia differentiated the amount of adaptation for all AC/A ratios. Conversely, the degree of completeness appears to be primarily associated with the type of refractive error.