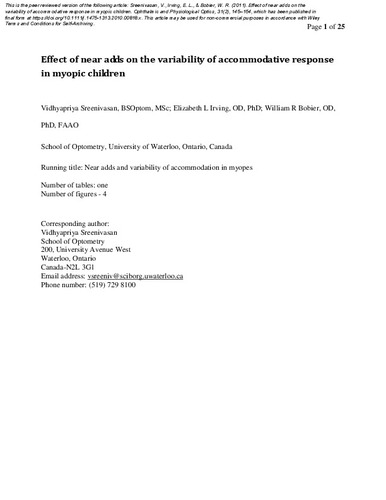 Purpose: Higher variability of accommodative response (VAR) has been reported in myopes and speculated to be a possible risk factor for the progression of myopia. We investigated whether near adds of +2D and −2D were capable of altering accommodative variability and also determined the influence of near phoria and viewing condition (binocular vs monocular) on the VAR in myopic and emmetropic children. Methods: Twenty-seven myopic and 25 emmetropic children between 7 and 14 years were examined. All children were classified into ‘normophores’ (0 to 4 exo), exophores (>6 exo) or esophores (>2 eso) based on their near phoria. Binocular and monocular steady-state measures of accommodation were obtained for 5 s using a PowerRefractor (Multichannel Co) while children fixated a high contrast target (33 cm) with distance correction, and then with +2D add and −2D add over the corrective lenses. The variation in accommodative responses (VAR) was defined as the standard deviation of the accommodative response during the 5 s period. Results: Myopic children showed higher VAR through their distance spectacle corrections compared to emmetropes (emmetropes = 0.23 ± 0.03D, myopes = 0.37 ± 0.07D, p < 0.001). Plus adds significantly reduced the VAR in myopic children to the level of emmetropes (emmetropes = 0.2 ± 0.03D, myopes = 0.19 ± 0.02D, p > 0.9). Introduction of a −2D add significantly increased the VAR in both refractive groups; however, myopes showed greater VAR compared to emmetropes (emmetropes = 0.39 ± 0.03D, myopes = 0.53 ± 0.07D, p < 0.001). Near phoria or binocular viewing did not alter the magnitude of fluctuations in either refractive group. VAR significantly correlated with the monocular accommodative error in both refractive groups (emmetropes r2 = 0.34; p < 0.0001; myopes: r2 = 0.35; p < 0.001). Pupil size, while varying with add type, did not confound the VAR. Conclusions: The near steady state accommodative response of young myopes shows greater variability than non-myopes. This difference is maintained when accommodative responses are increased beyond the vergence plane using − 2D adds. However, accommodative fluctuations were reduced to emmetropic levels when the stimulus to accommodation is reduced using a +2D add. The resulting VAR through adds appear to follow that expected from variations in accommodative demands and hence properties of the accommodative controller. Vergence postures (eso and exo phoria) do not appear to influence the VAR with and without near adds.