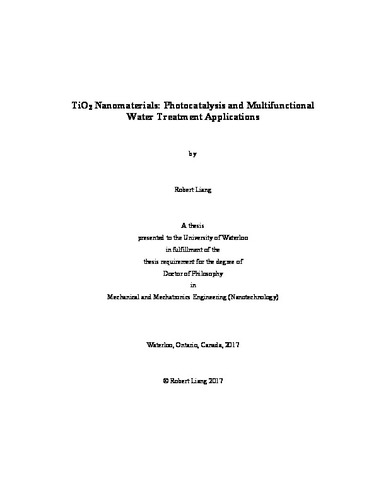 Globalization has increased the demand for clean water sources and has increased water pollution due to increased standards of consumption, urbanization and industrial activities. This has necessitated improvements in small-scale and large-scale water treatment processes in terms of improved energy efficiency for treatment and protocols and standards for unmonitored emerging contaminants. One such treatment platform that can be improved is in the area of advanced oxidation processes (AOPs). AOPs are used to decompose organic pollutants into smaller constituents. However, they often use hazardous chemicals that need to be added on a continual basis. TiO2 photocatalysis is an AOP that removes the need for consumable chemicals like hydrogen peroxide and ozone. This work focused on methods that improved the kinetics of TiO2 photocatalysis and combined the application of TiO2 photocatalytic AOP with other water applications, specifically filtration and corrosion protection, in order to increase its attractiveness for use in commercials applications by decreasing the energy required to operate and/or combining more than one application into one process. Two methods were studied to improve the reaction kinetics and limit recombination in TiO2 photocatalysis: (i) modifying physicochemical properties of TiO2 and (ii) altering operational parameters. Physicochemical properties of TiO2 were modified through the synthesis of various nanomaterials that limit recombination and/or increase the number reaction sites. One-dimensional TiO2 (TiO2 nanobelts) were synthesized and increased the electron lifetime compared to nanoparticles. Metal-semiconductor junctions (Ag-TiO2) were also made and they were able to efficiently separate electron and hole via the Schottky barrier effect and limit recombination. This work also investigated the effect of varying operational parameters in order to study their effects on the reaction kinetics. Operational parameters such as pH, light intensity, temperature and catalyst configuration (slurry or membrane) were explored. Of particular interest in this work was altering the light intensity intermittently, which is referred to as controlled periodic illumination (CPI). CPI was used as a means to increase reaction efficiency of TiO2 photocatalysis. The amount of energy required to remove organic contaminants was decreased by lowering the duty cycle and increasing the pulse frequency. In addition, CPI was used to compare the performance of slurry reactors and immobilized TiO2 membrane reactors, in which the latter suffered from mass transport limitations. CPI under mass transfer limitations revealed that the duty cycle may be reduced to 10% and this would not alter its reaction kinetics compared to continuous illumination. Utilization of TiO2¬ photocatalysis¬ was studied in three other water treatment application areas – emerging contaminants, filtration and corrosion protection. Using immobilized TiO2 under UV irradiation, emerging contaminants, specifically pharmaceuticals and personal care products were shown to be degraded based on their pharmaceutical properties (charge, molecular weight, and solubility). The compound charge had the greatest effect on the degradation performance. Another application that was explored was combining TiO2 AOP with filtration using a photocatalytic membrane reactor (PMR). TiO2 coated filters under PMR filtration were shown to increase flux under UV illumination and have higher removals than uncoated filters. Finally, the concurrent degradation of organic compounds and corrosion protection was demonstrated using TiO2 photoanodes coupled with steel. This method reduced the mass loss due to corrosion, while simultaneously degrading organic contaminants. It was shown that TiO2 photocatalysis and the TiO2 AOP process can be utilized in other pertinent areas in water treatment. Overall, the research demonstrated that the efficiency of TiO2 AOPs can be improved through the synthesis of nanomaterials that limit recombination, increasing material surface area, and effectively utilizing light using controlled periodic illumination. Furthermore, TiO2 photocatalysis can be combined with filtration and corrosion protection processes to increase its attractiveness in other water treatment areas.