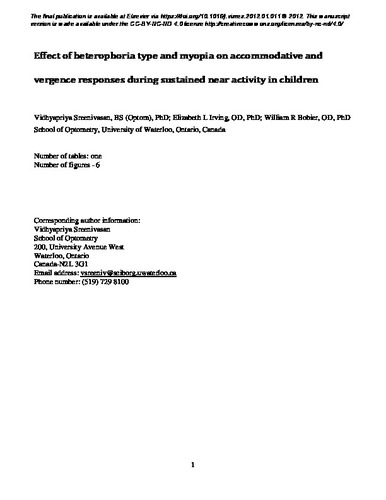 The influence of phoria-type and myopia on changes to vergence and accommodation during prolonged near-task was examined in 53 children. Participants were classified into phoria and refractive categories based on near phoria and cycloplegic refraction respectively. Measures of near phoria, binocular (BA) and monocular accommodation (MA) were obtained before and during a 20 min task when children binocularly fixated a high-contrast target at 33 cm through best corrective lenses. Vergence adaptation and accommodative adaptation were quantified using changes to near phoria and tonic accommodation respectively. The direction and magnitude of vergence adaptation was modified by the phoria-type (p < 0.001). Emmetropic exophores displayed convergent (less exo than baseline) adaptation while esophores showed divergent shifts (less eso than baseline) in phoria upon prolonged fixation. Myopic children also followed a similar pattern but showed greater divergent (or less convergent) shift (p < 0.001) in vergence adaptation for all phoria categories compared to emmetropes. Phoria-type also influenced the pattern of BA vs. MA (p < 0.001) such that exophores showed BA > MA while esophores showed MA > BA in both refractive groups. Accommodative adaptation was higher in myopes (p = 0.010) but did not demonstrate a significant effect of phoria (p = 0.4). The influence of phoria-type on vergence adaptation and the pattern of BA vs. MA relates primarily to the varying fusional vergence demands created by the direction of phoria. The greater divergent (or less convergent) shift in vergence adaptation seen in myopes (compared to emmetropes) could be attributed to their higher accommodative adaptation. Nevertheless, the adaptive patterns observed in myopic children do not appear to explain their high response AV/A ratios identified as a risk factor for myopia development.