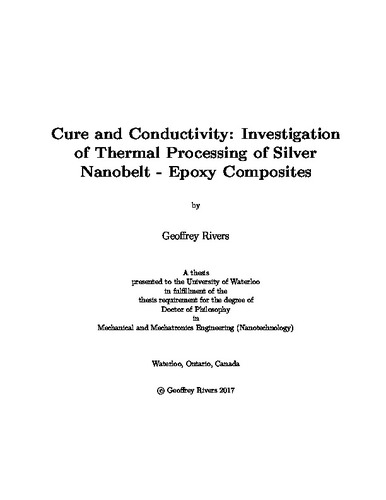 Electrically conductive adhesive (ECA) composites based on diglycidyl ether of bisphenol-A / triethylenetetramine (DGEBA/TETA) epoxy, including a hybrid nanocomposite containing newly developed silver nanobelts, have been investigated for the relationships between the cure process and the evolving electrical properties. When nanobelt-filled electrically conductive composites are fully developed their advantages may include: 1) reduced total filler content compared to microcomposites, resulting in reduced cost; 2) improved final conductivity; 3) improved longevity due to high nanobelt stability. The current work is focused on several studies of electrically conductive composites, and of silver nanobelts: 1) Traditional investigations, via differential calorimetry, of the effect that the filler additions had on the composite cure behavior. 2) Development of nanobelt synthesis methods to provide consistent and repeatable production of high quality one-dimensional silver nanobelt fillers. 3) Characterization of the particle joining process exhibited by silver nanobelts when heat treated without being inside a polymer matrix. 4) In-situ characterization of the evolving electrical conductivity throughout the cure progression of a microcomposite containing only silver microflake fillers. 5) Similar in-situ electrical characterization of conductivity throughout the cure of several hybrid nanocomposites containing silver nanobelts and silver microflakes. The primary results and scientific contributions from this work are: 1) Determination that addition of silver nanobelts to a composite influences cure and glass transition behavior less than or equal to the presence of small quantities of solvents, demonstrating that traditional cure analysis methods alone are not sufficient for characterizing these conductive nanocomposites. 2) Improvements in the particle aspect ratio and the batch repeatability when synthesizing silver nanobelts in gram-quantities, with the determination that the dominant factors controlling final morphology are the reaction mixture pH and the concentration of the dissolved silver salt in the precursor solution. 3) Identification of a non-diffusional joining process that occurs between silver nanobelts outside of a composite, during heat treatment between 75 °C and 180°C, allowing reductions in network electrical resistance without the detrimental effects of the activation of diffusion. 4) and 5) First observations of path-dependency during cure displayed by the evolving electrical conductivity of hybrid nanocomposites and a microcomposites, due to the onset of vitrification when partially cured. In addition, a number of other contributions were also made, mainly: 1) Design, construction, and verification a custom curing mold with inlaid reusable 4-wire electrical probe integrated with a specimen curing mold, designed to obtain in-situ electrical measurements throughout cure during high precision temperature control. 2) A table-top vacuum-mixing system that mounts onto a common model of vortex mixer, allowing solvent blending by continuous stirring under vacuum of up to 6 simultaneous batches of nanocomposites, to obtain composite batches with low final solvent contents. 3) Demonstration that small additions of high aspect ratio nanoparticles, such as silver nanobelts, into a hybrid nanocomposite has the potential to substantially alter the distribution of fillers, causing standard models of electrical percolation in hybrid systems to be potentially inaccurate. Although the hybrid nanocomposites filled with silver nanobelts has a lower conductivity than anticipated, it is thought that this is due to the path-dependent and resistance-increasing effect of its high glass transition temperature, and the resulting highly significant vitrification during cure. It is hypothesized that additions of solvent will substantially reduce vitrification effects, and improve conductivity further. This system shows potential of desirably high conductivity at filler contents as low as 55 wt% silver. Further, these demonstrations of the influence of vitrification on the evolving electrical properties during cure represent a significant source of bias or variation for research conducted on new conductive composites. Similarly, this may also significantly impact the utilization of conductive adhesives in industry, since industry prefers multi-stage cure treatments that feature significant amounts of vitrification.