G-Quadruplex DNA for Fluorescent and Colorimetric Detection of Thallium(I) 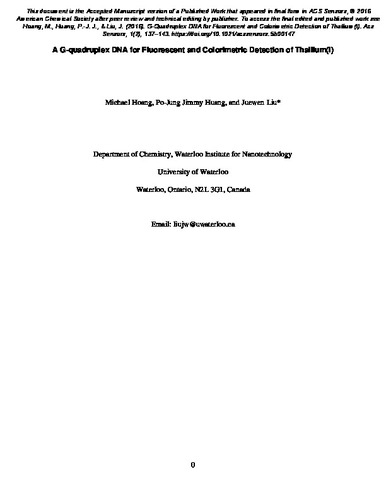 A G-quadruplex DNA for Fluorescent and Colorimetric Detection of Thallium(I)-s.pdf (816.0Kb)

Thallium is a highly toxic heavy metal, but its 495 nm FRET sensing is underexplored compared to its neighboring elements Blue in the periodic table: lead and mercury. Thallium has two " oxidation states. A DNAzyme-based biosensor for Tl3+ was reported recently, representing the first work in this area. However, the most environmentally abundant thallium is monovalent Tl+, which is the focus of this work. Since Tl+ is similar to K+ in terms of size and charge, G-quadruplex DNAs are herein tested for Tl+ detection. First, nine dual fluorophore labeled DNA probes are screened. Among them, a DNA designated PS2.M has the largest increase in fluorescence resonance energy transfer (FRET) efficiency upon Tl+ addition. This FRET-based assay is directly used as a biosensor yielding a detection limit of 59 mu M Tl+. In comparison, K+ had a much lower response and the other tested monovalent metals do not produce a significant signal increase. In addition, a colorimetric sensor was developed based on DNA protected gold nanoparticles. When folded by Tl+, the nonlabeled PS2.M DNA cannot effectively adsorb onto gold nanoparticles. This leads to a color change from red to blue upon salt addition. The detection limit is 4.6 mu M Tl+, and Tl+ spiked in a lake water sample can also be detected. CD spectroscopy is used to further understand Tl+ binding to PS2.M. This study demonstrates that DNA can also be used for detecting Tl+, and this work gives rise to a highly effective probe for this purpose.