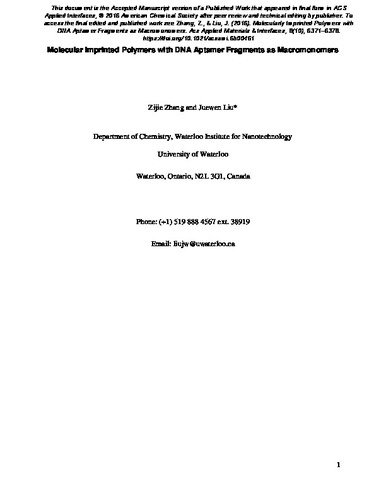 Molecularly imprinted polymers (MIPs) are produced in the presence of a template molecule. After removing the template, the cavity can selectively rebind the template. MIPs are attractive functional materials with a low cost and high stability, but traditional MIPs often suffer from low binding affinity. This study employs DNA aptamer fragments as macromonomers to improve MIPs. The DNA aptamer for adenosine was first split into two halves, fluorescently labeled, and copolymerized into MIPs. With a fluorescence quenching assay, the importance of imprinting was confirmed. Further studies were carried out using isothermal titration calorimetry (ITC). Compared to the mixture of the free aptamer fragments, their MIPs doubled the binding affinity. Each free aptamer fragment alone cannot bind adenosine, whereas MIPs containing each fragment are effective binders. We further shortened one of the aptamer fragments, and the DNA length was pushed to as short as six nucleotides, yielding MIPs with a dissociation constant of 27 mu M adenosine. This study provides a new method for preparing functional MIP materials by combining high-affinity biopolymer fragments with low-cost synthetic monomers, allowing higher binding affinity and providing a method for signaling binding based on DNA chemistry.