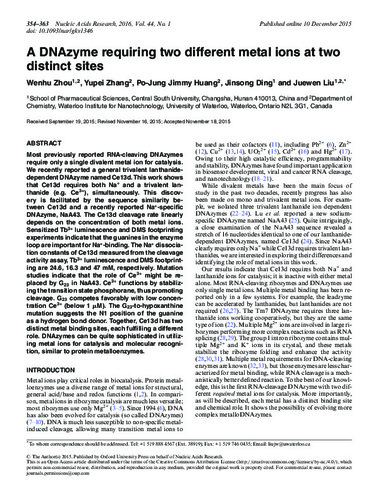 Most previously reported RNA-cleaving DNAzymes require only a single divalent metal ion for catalysis. We recently reported a general trivalent lanthanide-dependent DNAzyme named Ce13d. This work shows that Ce13d requires both Na+ and a trivalent lanthanide (e.g. Ce3+), simultaneously. This discovery is facilitated by the sequence similarity between Ce13d and a recently reported Na+-specific DNAzyme, NaA43. The Ce13d cleavage rate linearly depends on the concentration of both metal ions. Sensitized Tb3+ luminescence and DMS footprinting experiments indicate that the guanines in the enzyme loop are important for Na+-binding. The Na+ dissociation constants of Ce13d measured from the cleavage activity assay, Tb3+ luminescence and DMS footprinting are 24.6, 16.3 and 47 mM, respectively. Mutation studies indicate that the role of Ce3+ might be replaced by G(23) in NaA43. Ce3+ functions by stabilizing the transition state phosphorane, thus promoting cleavage. G(23) competes favorably with low concentration Ce3+ (below 1 mu M). The G(23)-to-hypoxanthine mutation suggests the N1 position of the guanine as a hydrogen bond donor. Together, Ce13d has two distinct metal binding sites, each fulfilling a different role. DNAzymes can be quite sophisticated in utilizing metal ions for catalysis and molecular recognition, similar to protein metalloenzymes.