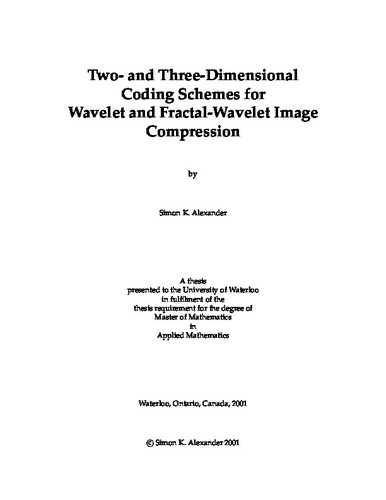 This thesis presents two novel coding schemes and applications to both two- and three-dimensional image compression. Image compression can be viewed as methods of functional approximation under a constraint on the amount of information allowable in specifying the approximation. Two methods of approximating functions are discussed: Iterated function systems (IFS) and wavelet-based approximations. IFS methods approximate a function by the fixed point of an iterated operator, using consequences of the Banach contraction mapping principle. Natural images under a wavelet basis have characteristic coefficient magnitude decays which may be used to aid approximation. The relationship between quantization, modelling, and encoding in a compression scheme is examined. Context based adaptive arithmetic coding is described. This encoding method is used in the coding schemes developed. A coder with explicit separation of the modelling and encoding roles is presented: an embedded wavelet bitplane coder based on hierarchical context in the wavelet coefficient trees. Fractal (spatial IFSM) and fractal-wavelet (coefficient tree), or IFSW, coders are discussed. A second coder is proposed, merging the IFSW approaches with the embedded bitplane coder. Performance of the coders, and applications to two- and three-dimensional images are discussed. Applications include two-dimensional still images in greyscale and colour, and three-dimensional streams (video).