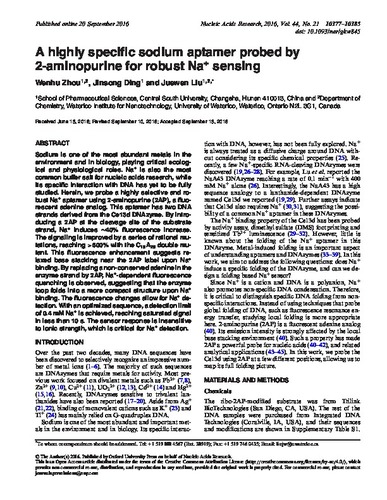 Sodium is one of the most abundant metals in the environment and in biology, playing critical ecological and physiological roles. Na+ is also the most common buffer salt for nucleic acids research, while its specific interaction with DNA has yet to be fully studied. Herein, we probe a highly selective and robust Na+ aptamer using 2-aminopurine (2AP), a fluorescent adenine analog. This aptamer has two DNA strands derived from the Ce13d DNAzyme. By introducing a 2AP at the cleavage site of the substrate strand, Na+ induces similar to 40% fluorescence increase. The signaling is improved by a series of rational mutations, reaching > 600% with the C(10)A(20) double mutant. This fluorescence enhancement suggests relaxed base stacking near the 2AP label upon Na+ binding. By replacing a non-conserved adenine in the enzyme strand by 2AP, Na+-dependent fluorescence quenching is observed, suggesting that the enzyme loop folds into a more compact structure upon Na+ binding. The fluorescence changes allow for Na+ detection. With an optimized sequence, a detection limit of 0.4 mM Na+ is achieved, reaching saturated signal in less than 10 s. The sensor response is insensitive to ionic strength, which is critical for Na+ detection.