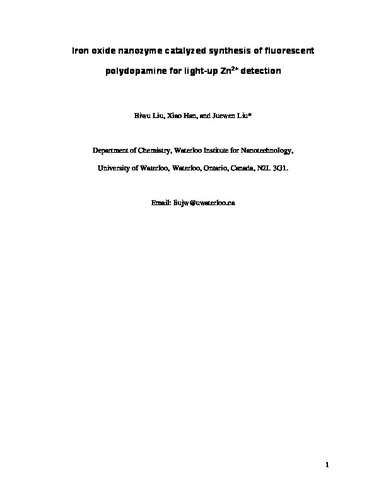 Fluorescent polydopamine (FPD) is an interesting material with excellent biocompatibility. However, its preparation is currently a lengthy and potentially dangerous process. We herein employ magnetic iron oxide (Fe3O4) nanoparticles as a peroxidase-mimicking nanozyme to produce FPD under mild conditions. Different from previous protocols using multiple steps with up to 6% (similar to 2 M) H2O2, this preparation takes place in a single step with just 5 mM H2O2 at room temperature. The oxidized product shows excitation-wavelength-dependent emission peaks, similar to previous reports. The reaction kinetics, pH, temperature, and ionic strength are individually optimized. Among a diverse range of other nanomaterials tested, including Fe2O3, CeO2, CoO, Co3O4, NiO, TiO2, gold nanoparticles, and graphene oxide, Fe2O3 and graphene oxide yielded relatively weak emission, while the rest of the materials failed to produce FPD. The Fe3O4 nanoparticles retained similar to 90% catalytic activity even after ten cycles of synthesis. Finally, Zn2+ can enhance the fluorescence of FPD under 360 nm excitation but not under 480 nm excitation, leading to a sensitive light-up sensor with a detection limit of 60 nM Zn2+. Therefore, this work has demonstrated not only a novel use of nanozymes, but also an interesting application of FPD.