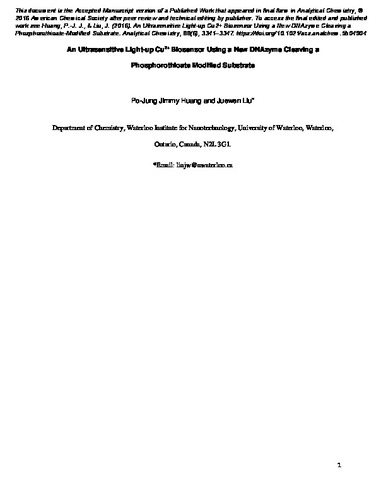 Cu2+ is a very important metal ion in biology, environmental science, and industry. Developing biosensors for Cu2+ is a key topic in analytical chemistry. DNAzyme-based sensors are highly attractive:, for their excellent sensitivity, stability, and programmability, In the past decade, a few Cu2+ biosensors were reported using DNAzymes with DNA cleavage or DNA ligation activity. However, they require unstable ascorbate or imidazole activation. So far, no RNA cleaving DNAzymes specific for Cu2+ are known. In this work, a phosphorothioate (PS) RNA-containing library was used for in vitro selection, and a few new Cu2+-specific RNA-cleaving DNAzymes were isolated. Among them, a DNAzyme named PSCu10 was studied further. It has only eight nucleotides in the enzyme loop with a cleavage rate of 0.1 min(-1) in the presence of 1 mu M Cu2+ at pH 6.0 (its optimal pH). Between the two diastereomers of the PS RNA chiral center, the R-p isomer is 37 times more active than the S-p one. Among the other divalent metal ions, only Hg2+ can cleave the substrate due to its extremely high thiophilicity. A. catalytic beacon sensor was designed with a detection limit of 1.6 nM Cu2+ and extremely high selectivity. PSCu10 is specific for Cu2+; and it has no cleavage in the presence of ascorbate, which reduces Cu2+ to. Cu+.