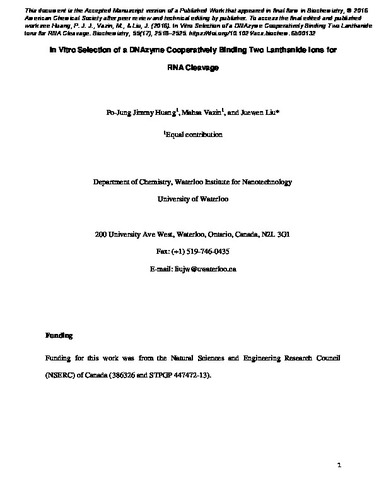 Trivalent lanthanide ions (Ln(3+)) were recently employed to select RNA-cleaving DNAzymes, and three new DNAzymes have been reported so far. In this work, dysprosium (Dy3+) was used with a library containing 50 random nucleotides. After six rounds of in vitro selection, a new DNAzyme named Dy10a was obtained and characterized. Dy10a has a bulged hairpin structure cleaving a RNA/DNA chimeric substrate. Dy10a is highly active in the presence of the five Ln(3+) ions in the middle of the lanthanide series (Sm3+, Eu3+, Gd3+, Tb3+, and Dy3+), while its activity descends on the two sides. The cleavage rate reaches 0.6 min(-1) at pH 6 with just 200 nM Sm3+, which is the fastest among all known Ln(3+)-dependent enzymes. Dy10a binds two Ln(3+) ions cooperatively. When a phosphorothioate (PS) modification is introduced at the cleavage junction, the activity decreases by >2500-fold for both the R-p and S-p diastereomers, and thiophilic Cd2+ cannot rescue the activity. The pH-rate profile has a slope of 0.37 between pH 4.2 and 5.2, and the slope was even lower at higher pH. On the basis of these data, a model of metal binding is proposed. Finally, a catalytic beacon sensor that can detect Ho3+ down to 1.7 nM is constructed.