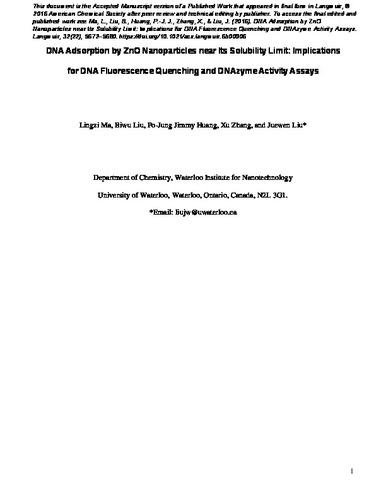 Zinc oxide (ZnO) is a highly important material, and Zn2+ is a key metal ion in biology. ZnO and Zn2+ interconvert via dissolution and hydrolysis/condensation. In this work, we explore their interactions with DNA, which is important for biointerface, analytical, and bioinorganic chemistry. Fluorescently labeled DNA oligonucleotides were adsorbed by a low concentration (around 5 mu g/mL) of ZnO nanoparticles, near the solubility limit. Right after mixing, fluorescence quenching occurred, indicating DNA adsorption. Then, fluorescence recovered, attributable to ZnO dissolution. The dissolution rate followed A(5) > T-5 > C-5. Dissolution was slower with longer DNA. The adsorption affinity was also measured by a displacement assay to be G(5) > C-5 > T-5 > A(5), suggesting that tightly adsorbed DNA can retard ZnO dissolution. Electrostatic interactions are important for DNA adsorption because ZnO is positively charged at neutral pH, and a high salt concentration inhibits DNA adsorption. Next, in situ formation of ZnO from Zn2+ was studied. First, titrating Zn2+ into a fluorescently labeled oligonucleotide at pH 7.5 resulted in an abrupt fluorescence quenching beyond 0.2 mM Zn2+. At pH 6, quenching occurred linearly with the Zn2+ concentration, suggesting the effect of Zn2+ precipitation at pH 7.5. Second, a Zn2+-dependent DNA-cleaving DNAzyme was studied. This DNAzyme was inhibited at higher than 2 mM Zn2+, attributable to Zn2+ precipitation and adsorption of the DNAzyme. This paper has established the interplay between DNA, Zn2+, and ZnO. This understanding can avoid misinterpretation of DNA assay results and adds knowledge to DNA immobilization.