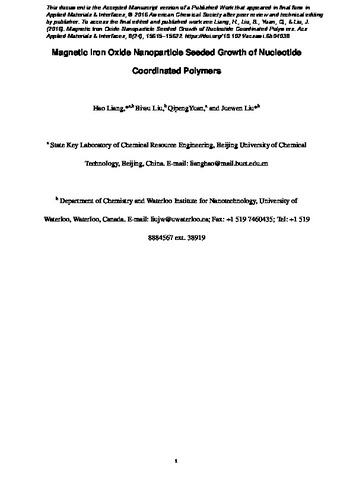 The introduction of functional molecules to the surface of magnetic iron oxide nanoparticles (NPs) is of critical importance. Most previously reported methods were focused on surface ligand attachment either by physisorption or covalent conjugation, resulting in limited ligand loading capacity. In this work, we report the seeded growth of a nucleotide coordinated polymer shell, which can be considered as a special form of adsorption by forming a complete shell. Among all of,the tested metal ions, Fe3+ is the most efficient for this seeded growth. A diverse range of guest molecules, including small organic dyes, proteins, DNA, and gold NPs, can be encapsulated in the shell. All of these molecules were loaded at a much higher capacity compared to that on the naked iron oxide NP core, confirming the advantage of the coordination polymer (CP) shell. In addition, the CP shell provides better guest protein stability compared to that of simple physisorption while retaining guest activity as confirmed by the entrapped glucose oxidase assay. Use of this system as a peroxidase nanozyme and glucose biosensor was demonstrated, detecting glucose as low as 1.4 mu M with excellent stability. This work describes a new way to functionalize inorganic materials with a biocompatible shell.