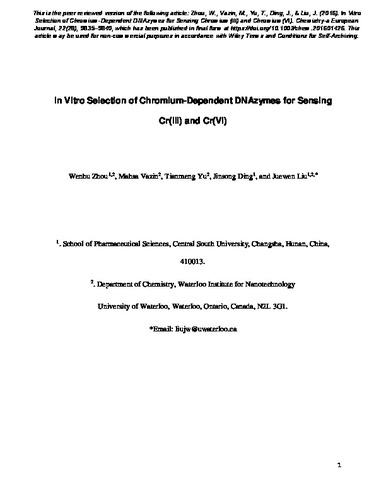 Chromium is a very important analyte for environmental monitoring, and developing biosensors for chromium is a long-standing analytical challenge. In this work, in vitro selection of RNA-cleaving DNAzymes was carried out in the presence of Cr3+. The most active DNAzyme turned out to be the previously reported lanthanide-dependent Ce13d DNAzyme. Although the Ce13d activity was about 150-fold lower with Cr3+ than that with lanthanides, the activity of lanthanides and other competing metals was masked by using a phosphate buffer; this left Cr3+ as the only metal that could activate Ce13d. With 100 mu mm Cr3+, the cleavage rate is 1.6 h(-1) at pH 6. By using a molecular beacon design, Cr3+ was measured with a detection limit of 70 nm, which was significantly lower than the United States Environmental Protection Agency (EPA) limit (11 mu m). Cr4+ was measured after reduction by NaBH4 to Cr3+, and it could be sensed with a similar detection limit of 140 nm Cr4+; this value was lower than the EPA limit of 300 nm. This sensor was tested for chromium speciation analysis in a real sample, and the results supported its application for environmental monitoring. At the same time, it has enhanced our understanding of the interactions between chromium and DNA.