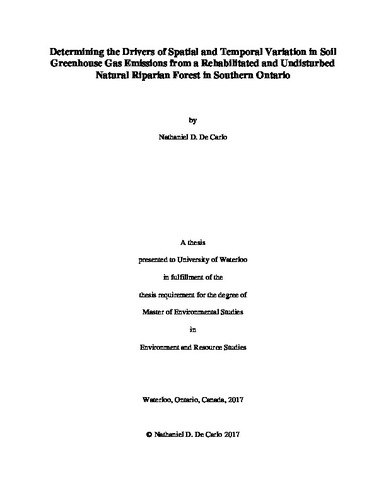 As the interface between terrestrial and aquatic ecosystems, riparian zones have been shown to provide extensive ecosystem services, particularly with respect to improved water quality, carbon sequestration, and wildlife habitat. Riparian rehabilitation is often implemented to restore or maintain these beneficial services following riparian removal or degradation. This rehabilitation usually occurs in agriculturally dominated landscapes to mitigate the negative impacts associated with agricultural land-use, such as leaching of nitrates from fertilizer. Although riparian zones are extremely effective at this mitigation, there is evidence that such high nitrate input and carbon availability may make these riparian zones hotspots for soil greenhouse gas emissions attributed to climate change, specifically nitrous oxide (N₂O) and carbon dioxide (CO₂). The objective of this study was to determine seasonal and temporal trends in greenhouse gas emissions, as well as how soil and vegetation drive these emissions, between an approximately 30 year old rehabilitated (RH) and an undisturbed natural (UNF) riparian forest in southern Ontario, Canada. Mean soil CO₂-C emissions for the RH and UNF sites were 26.98 and 17.91 mg CO₂-C m-² h-¹, respectively. Mean soil N₂O-N emissions for the RH and UNF sites were 7.62 and 5.93 μg N₂O-N m-² h-¹, respectively. However, neither soil CO₂-C nor N₂O-N emissions varied significantly between the two land-uses (p>0.05). Both soil CO₂-C and N₂O-N emissions exhibited strong seasonal patterns for both land-uses, with elevated emissions during the summer. Soil CO₂-C emissions varied spatially within land-uses based on soil moisture, and the magnitude of this relationship was season-dependent. Spatial variability of soil N₂O-N emissions within land-uses appeared to follow anaerobic conditions ideal for denitrification, such as elevated soil moisture levels and nitrate/ammonium concentration. Soil greenhouse gas emissions were significantly correlated to each other, and were most heavily influenced by soil temperature and soil moisture. The results of this study provide evidence that although soil and vegetation can vary substantially between rehabilitated and natural riparian forests, differences in greenhouse gas emissions may be offset after 30 years of rehabilitation. Furthermore, soil greenhouse gas emissions in riparian systems are most directly affected by soil microclimate and seasonality, rather than spatial position or vegetation. Riparian greenhouse gas emissions rely on complex interactions between soil, vegetation, and atmospheric variables and further research on these interactions is needed to disentangle the drivers of emissions among different riparian ecosystems.