Using Available Information in the Assessment of Diagnostic Protocols 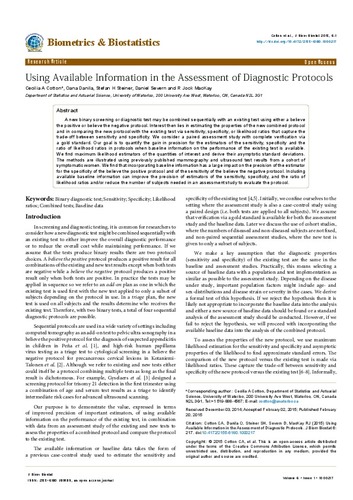 A new binary screening or diagnostic test may be combined sequentially with an existing test using either a believe the positive or believe the negative protocol. Interest then lies in estimating the properties of the new combined protocol and in comparing the new protocol with the existing test via sensitivity, specificity, or likelihood ratios that capture the trade-o between sensitivity and specificity. We consider a paired assessment study with complete verification via a gold standard. Our goal is to quantify the gain in precision for the estimators of the sensitivity, specificity and the ratio of likelihood ratios in protocols when baseline information on the performance of the existing test is available. We find maximum likelihood estimators of the quantities of interest and derive their asymptotic standard deviations. The methods are illustrated using previously published mammography and ultrasound test results from a cohort of symptomatic women. We find that incorporating baseline information has a large impact on the precision of the estimator for the specificity of the believe the positive protocol and of the sensitivity of the believe the negative protocol. Including available baseline information can improve the precision of estimators of the sensitivity, specificity, and the ratio of likelihood ratios and/or reduce the number of subjects needed in an assessment study to evaluate the protocol.