An Aeroacoustic Study of Airfoil Self-Noise for Wind Turbine Applications 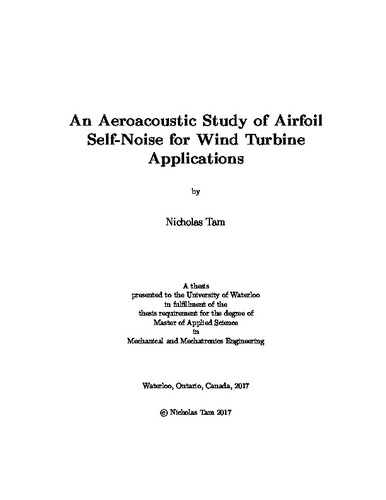 The current study addresses the issue of noise relating to both large and small scale wind turbines. In utility scale applications, larger size rotors in new generations of wind turbines bring an increasing challenge to manage noise emissions. A better understanding of wind turbine noise characteristics, behaviour and generation mechanics can facilitate the development of noise reduction strategies. This can greatly aid in their adoption. The issue of noise, however, is not exclusive to large scale wind turbines. Small scale wind turbines, operating in laminar or transitional regimes, has the potential to emit tonal noise which can be more audible and of a greater nuisance. Small scale wind turbines can be installed in higher traffic areas closer to human receptors. As such, the understanding of their noise characteristics, behaviour and generation mechanics is important as well. In Reynolds number regime where small scale wind turbine operates, tonal noise is primarily caused by laminar boundary layer-vortex shedding (LBL-VS) noise generation mechanism. In the controlled environment of a closed circuit wind tunnel, the SD-7037 airfoil profile is examined at Re = 4.0 x 10^4. Acoustic measurements are collected when the airfoil is under dynamic oscillation and under various static angles of attack. Results found evidence to suggest LBL-VS noise originated from the suction side of the airfoil in this study; suggesting noise reduction efforts should be focused on suction side phenomenon in similar low Reynold number flow (Re < 10^5). Under dynamic oscillation, airfoil self-noise is studied in condition more representative of outdoor conditions. The tonal noise was found to be reduced compared with static low angles of attack results. The tones were also seen as intermittent; appearing at certain phases of the oscillation cycle. Side peaks were also found at the narrowband acoustic spectra; with the cause linked to the dynamic oscillating frequency. Trailing edge saw-tooth serrations, which have been used on large scale wind turbines, are examined for their noise reduction properties with the SD-7037 airfoil profile. The results were found to be mixed. For larger scale wind turbines, turbulent boundary layer flow more commonly found on the surface of the airfoil, leading to the generation of broadband noise at the trailing edge. The current study examines a 10 m diameter passive controlled wind turbine at the Wind Energy Group outdoor wind turbine test site. The behaviour of the wind turbine noise with respect to on site parameters such as upstream wind speed, upstream wind direction, wind turbine yaw direction, wind turbine blade pitch angle and wind turbine rotor rpm are examined. The feasibility for performing further acoustic experiments at the Wind Energy Group outdoor wind turbine test site is also assessed.