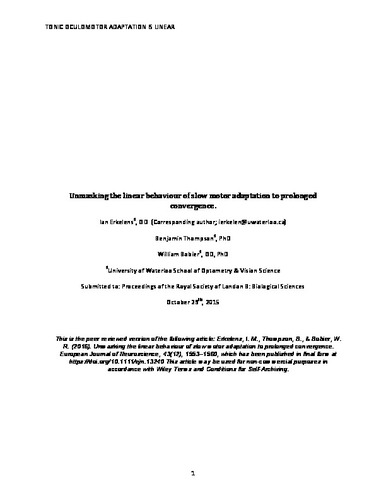 Adaptation to changing environmental demands is central to maintaining optimal motor system function. Current theories suggest that adaptation in both the skeletal-motor and oculomotor systems involves a combination of fast (reflexive) and slow (recalibration) mechanisms. Here we used the oculomotor vergence system as a model to investigate the mechanisms underlying slow motor adaptation. Unlike reaching with the upper limbs, vergence is less susceptible to changes in cognitive strategy that can affect the behaviour of motor adaptation. We tested the hypothesis that mechanisms of slow motor adaptation reflect early neural processing by assessing the linearity of adaptive responses over a large range of stimuli. Using varied disparity stimuli in conflict with accommodation, the slow adaptation of tonic vergence was found to exhibit a linear response whereby the rate (R2 = 0.85, P < 0.0001) and amplitude (R2 = 0.65, P < 0.0001) of the adaptive effects increased proportionally with stimulus amplitude. These results suggest that this slow adaptive mechanism is an early neural process, implying a fundamental physiological nature that is potentially dominated by subcortical and cerebellar substrates.