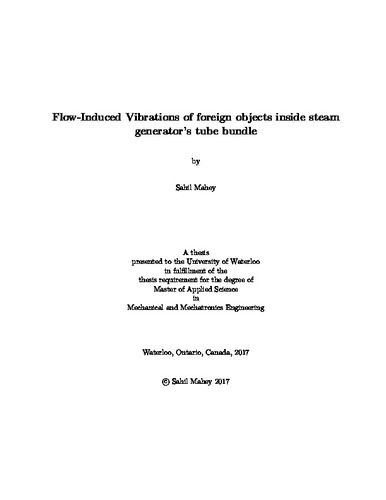 Flow-induced vibrations of foreign objects were studied experimentally at University of Waterloo’s water flume facility. The main objective of this study was to understand the three-dimensional dynamic response of foreign objects inside normal triangle tube bundle and estimate semi-empirically the amount of time taken by these objects to cause critical wear damage to the tube bundle tubes. Based on the information obtained from previous Foreign Objects Search and Retrieval (FOSAR) activities , the dynamic response of wire and plate samples each with non-dimensional length L/D = 2.8, 3.4, 4.0 and 4.6 were studied at ReD = 36,257 and 42,682, and Tu = 2.0% and 7.5%, respectively. They were placed inside tube bundle in the shape of a hook, which allowed pitching motion, yawing motion and Z-direction translation motion. Using Archard’s semi-empirical wear equation and available wear coefficients, wear was estimated for tubes made from I600 and I690 material, due to vibration of foreign objects made from S409, S403 and S304 material. Experimentally recorded three-dimensional dynamic response of the foreign objects showed that these objects are undergoing stationary random vibration. The Z amplitude response is significantly higher than the response in X and Y direction. For all the foreign objects with measurable vibration response, the contribution of yaw component to the overall motion is negligible, meaning that foreign objects are exhibiting planar response. As a result, the dynamic interaction between foreign object and tube bundle tube surface will only be of sliding type. Additionally, it was observed that the planar response has a significant contribution from both pitching and Z translation motion component. The parametric study showed that the geometry of the foreign object affects its RMS amplitude, with wire samples having larger RMS amplitude than plate samples. The non-dimensional length (L/D) affects the response of the foreign object depending on its geometry. The RMS amplitude of wire samples did not show any significant change with the change in L/D, whereas only plate samples of L/D = 3.4 and 4.0 showed measurable vibration response. Moreover, both wire and plate samples are more likely to vibrate in high Reynolds number flow environment, and the amplitude of vibration decrease with increase in turbulence intensity for all foreign objects samples studied. Comparing current results with the results from previous studies showed that even small changes in the foreign object’s geometry could result in significant variation in RMS amplitude. Wear analysis showed that both wire and plate samples had a potential to do critical wear damage (i.e. wear out 40% of tube wall thickness) within four year period as the flow velocity is increased. Influence of material combination on foreign object related wear is more significant in low flow velocity environment. Geometry of the foreign object also affects the critical wear time with wear due to plate samples being more aggressive than wire samples. Additionally, it was shown that foreign objects vibrating in high turbulence intensity environment had higher critical wear time. Similar to material combination, effect of geometry and turbulence intensity becomes progressively more significant as the velocity decreases. Based on the results obtained in this study, during FOSAR activities, priority should be given to foreign objects found in high flow velocity and low turbulence intensity environment, since these objects are more likely to vibrate and cause critical wear damage within four year time period.