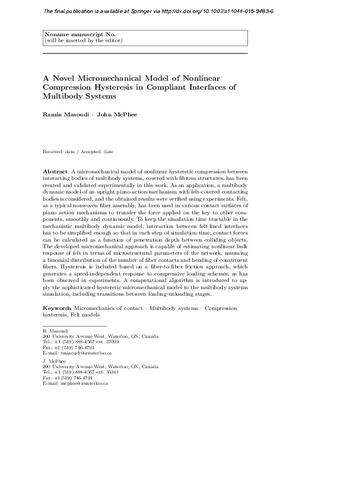 A micromechanical model of nonlinear hysteretic compression between interacting bodies of multibody systems, covered with fibrous structures, has been created and validated experimentally in this work. As an application, a multibody dynamic model of an upright piano action mechanism with felt-covered contacting bodies is considered, and the obtained results were verified using experiments. Felt, as a typical nonwoven fiber assembly, has been used in various contact surfaces of piano action mechanisms to transfer the force applied on the key to other components, smoothly and continuously. To keep the simulation time tractable in the mechanistic multibody dynamic model, interaction between felt-lined interfaces has to be simplified enough so that in each step of simulation time, contact forces can be calculated as a function of penetration depth between colliding objects. The developed micromechanical approach is capable of estimating nonlinear bulk response of felt in terms of microstructural parameters of the network, assuming a binomial distribution of the number of fiber contacts and bending of constituent fibers. Hysteresis is included based on a fiber-to-fiber friction approach, which generates a speed-independent response to compressive loading schemes, as has been observed in experiments. A computational algorithm is introduced to apply the sophisticated hysteretic micromechanical model to the multibody systems simulation, including transitions between loading–unloading stages.