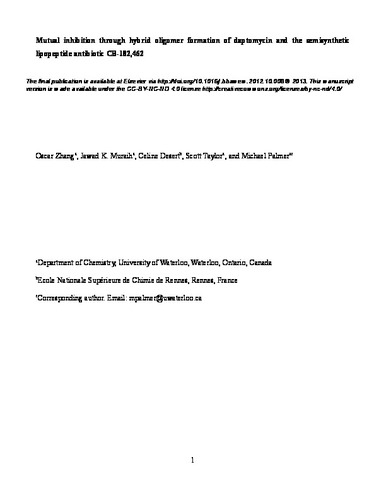 Daptomycin is a clinically important lipopeptide antibiotic that kills Gram-positive bacteria through membrane depolarization. Its activity requires calcium and the presence of phosphatidylglycerol in the target membrane. Calcium and phosphatidylglycerol also promote the formation of daptomycin oligomers, which have been assumed but not proven to be required for the bactericidal effect. Daptomycin shares substantial structural similarity with another lipopeptide antibiotic, A54145; the two have identical amino acid residues in 5 out of 13 positions and similar ones in 4 more positions. We here examined whether these conserved residues are sufficient for oligomer formation. To this end, we used fluorescence energy transfer and excimer fluorescence to detect hybrid oligomers of daptomycin and CB-182,462, a semisynthetic derivative of A54145. Mixtures of the two compounds indeed produced hybrid oligomers, but at the same time displayed a significantly less than additive antibacterial activity against Bacillus subtilis. The existence of functionally impaired oligomers indicates that oligomer formation is indeed important for antibacterial function. However, it also shows that oligomerization is not sufficient; once formed, the oligomers must take another step in order to acquire antibacterial activity. Thus, the amino acid residues shared between daptomycin and CB-182,462 suffice for formation of the oligomer, but not for its subsequent activation.