Oligomerization and hemolytic properties of the C-terminal domain of pyolysin, a cholesterol-dependent cytolysin 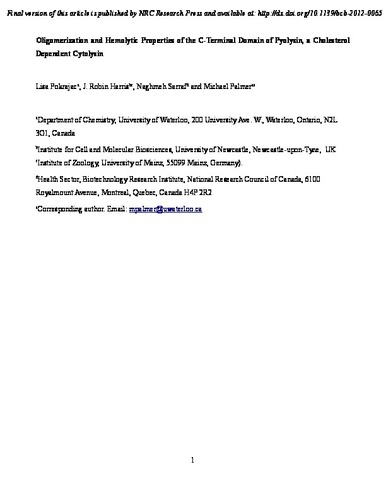 Pyolysin (PLO) belongs to the homologous family of the cholesterol-dependent cytolysins (CDCs), which bind to cell membranes containing cholesterol to form oligomeric pores of large size. The CDC monomer structure consists of 4 domains. Among these, the C-terminal domain 4 has been implicated in membrane binding of the monomer, while the subsequent processes of oligomerization and membrane insertion have primarily been assigned to other domains of the molecule. Recombinantly expressed or proteolytic fragments that span domain 4 of the CDCs streptolysin O and perfringolysin O bind to membranes but fail to oligomerize, and they inhibit the activity of the respective wild-type toxins. We report here that the isolated domain 4 of pyolysin (PLO-D4) not only binds to membranes but also forms oligomers with itself, as well as hybrid oligomers with the full-length toxin. As expected, the pure PLO-D4 oligomers are devoid of pore-forming activity. Surprisingly, however, within hybrid oligomers, PLO-D4 not only fails to inhibit, but even amplifies the hemolytic activity of the full-length toxin, to an extent similar to that of doubling the amount of the full-length toxin alone. We propose that this amplification may be related to the kinetics of the oligomerization reaction. Overall, our findings indicate a greater role of domain 4 in the oligomerization of CDCs than previously demonstrated.