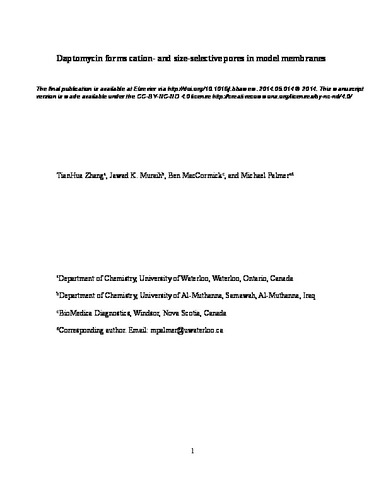 Daptomycin is a lipopeptide antibiotic that is used clinically to treat severe infections caused by Gram-positive bacteria. Its bactericidal action involves the calcium-dependent binding to membranes containing phosphatidylglycerol, followed by the formation of membrane-associated oligomers. Bacterial cells exposed to daptomycin undergo membrane depolarization, suggesting the formation of channels or pores in the target membranes. We here used a liposome model to detect and characterize the permeability properties of the daptomycin pores. The pores are selective for cations, with permeabilities being highest for Na+, K+, and other alkali metal ions. The permeability is approximately twice lower for Mg++, and lower again for the organic cations choline and hexamethonium. Anions are excluded, as is the zwitterion cysteine. These observations account for the observed depolarization of bacterial cells by daptomycin and suggest that under typical in vivo conditions depolarization is mainly due to sodium influx.