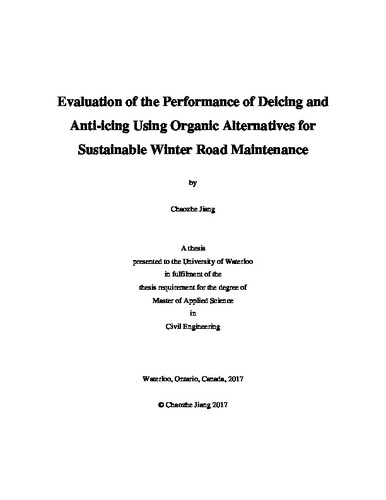 Large amounts of salts are applied every winter to highways, streets, parking lots and sidewalks. Despite its effectiveness, the use of salt has increasingly become a public concern because of the detrimental effect it has on the environment and the corrosion it causes to infrastructure and vehicles. Transportation agencies therefore are actively seeking ways to reduce salt use while keeping their roads safe. As an alternative to regular salt, new chemicals and additives, mostly agriculture byproducts or agro-based organic alternatives, that have fewer environmental side effects than regular road salts, are being developed by the industry and are increasingly available in the market. However, information on the field performance of these new organic alternatives as compared to regular salts is still limited. Questions concerning optimal application rates, mixing ratios, and the role of weather and traffic conditions still need to be answered for some newly available products. In this study, two organic agro-based products, namely, Fusion and Geomelt, for deicing/anti-icing treatments, were selected and their performance was tested through a series of field tests. The goal of this research is to investigate how well they would perform in field as compared to regular salt brine. A field test was conducted to collect performance data of these materials when used in prewetting and anti-icing operations. A total of nine snow events were covered in this experiment. The maintenance treatments that were tested followed the common maintenance operation protocols recommended by the two municipalities. Traction levels and visual conditions were used as the main performance metrics along with other road weather and pavement condition data. Three main findings were obtained from an analysis of the test data. First, salts prewetted with these organic compounds performed similarly to those using regular salt brine. In most cases, the performance differences were not statistically significant, indicating that there was little evidence supporting the superiority of the organic materials for a prewetting purpose. The test data also indicated that this was true under low temperatures (~-10°C), contrary to the common beliefs about the performance of these products. However, it should be noted that performance similarities could also be influenced by the fact that the organic liquids were used for prewetting salt at a much lower ratio (5% vs. 20% for brine). Also, the dominant compound in these prewet mixes is still regular salt - sodium chloride (95% for organic treated salt and 85% for brine treated salt). When used for prewetting purposes, Geomelt and Fusion showed similar performance in terms of traction level. However, when used as additives to brines for Direct Liquid Application (DLA), both organic products largely outperformed pure salt brine despite being applied at a half its application rate. Field tests also showed that the tested compounds could help maintain up to 20% higher traction and could maintain safer friction levels for up to an hour longer. Fusion outperformed Geomelt by up to 10 % in terms of traction level. Lastly, in general the sections treated with DLA performed significantly better than the untreated sections, confirming the advantage of anti-icing strategy for snow and ice control. The field data was further used to estimate a performance model that can be used by maintenance practitioners facing similar conditions. Two different models were explored, the first set of models focused on assessing the relative snow melting rate of Geomelt and Fusion as compared to regular brine. In its final form, the model suggests that the difference in the friction number on a surface maintained with Fusion or Geomelt and one maintained with Brine will increase at a rate of 1.76 per hour and 1.95 per hour respectively on identical test sections if no further maintenance actions are taken. The second set of models estimated were general purpose models that can be used to estimate the friction level on a roadway after maintenance has been conducted. In these models, the effects of weather, wind, and chemical type were found to be significant.