Responses of carbon dioxide flux and plant biomass to water table drawdown in a treed peatland in northern Alberta: a climate change perspective 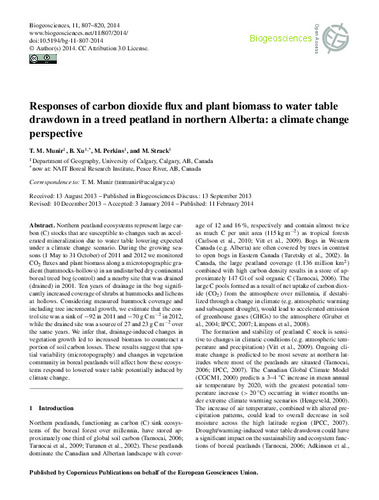 Northern peatland ecosystems represent large carbon (C) stocks that are susceptible to changes such as accelerated mineralization due to water table lowering expected under a climate change scenario. During the growing seasons (1 May to 31 October) of 2011 and 2012 we monitored CO2 fluxes and plant biomass along a microtopographic gradient (hummocks-hollows) in an undisturbed dry continental boreal treed bog (control) and a nearby site that was drained (drained) in 2001. Ten years of drainage in the bog significantly increased coverage of shrubs at hummocks and lichens at hollows. Considering measured hummock coverage and including tree incremental growth, we estimate that the control site was a sink of −92 in 2011 and −70 g C m−2 in 2012, while the drained site was a source of 27 and 23 g C m−2 over the same years. We infer that, drainage-induced changes in vegetation growth led to increased biomass to counteract a portion of soil carbon losses. These results suggest that spatial variability (microtopography) and changes in vegetation community in boreal peatlands will affect how these ecosystems respond to lowered water table potentially induced by climate change