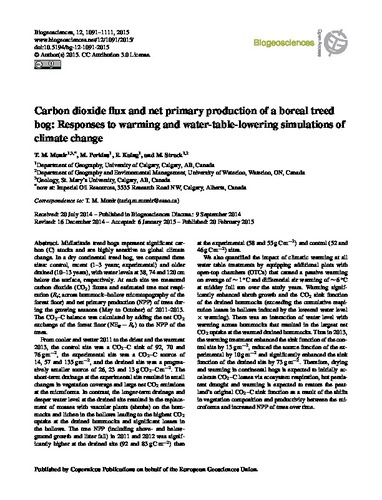 Midlatitude treed bogs represent significant carbon (C) stocks and are highly sensitive to global climate change. In a dry continental treed bog, we compared three sites: control, recent (1–3 years; experimental) and older drained (10–13 years), with water levels at 38, 74 and 120 cm below the surface, respectively. At each site we measured carbon dioxide (CO2) fluxes and estimated tree root respiration (Rr; across hummock–hollow microtopography of the forest floor) and net primary production (NPP) of trees during the growing seasons (May to October) of 2011–2013. The CO2–C balance was calculated by adding the net CO2 exchange of the forest floor (NEff-Rr) to the NPP of the trees. From cooler and wetter 2011 to the driest and the warmest 2013, the control site was a CO2–C sink of 92, 70 and 76 g m−2, the experimental site was a CO2–C source of 14, 57 and 135 g m−2, and the drained site was a progressively smaller source of 26, 23 and 13 g CO2–C m−2. The short-term drainage at the experimental site resulted in small changes in vegetation coverage and large net CO2 emissions at the microforms. In contrast, the longer-term drainage and deeper water level at the drained site resulted in the replacement of mosses with vascular plants (shrubs) on the hummocks and lichen in the hollows leading to the highest CO2 uptake at the drained hummocks and significant losses in the hollows. The tree NPP (including above- and below-ground growth and litter fall) in 2011 and 2012 was significantly higher at the drained site (92 and 83 g C m−2) than at the experimental (58 and 55 g C m−2) and control (52 and 46 g C m−2) sites. We also quantified the impact of climatic warming at all water table treatments by equipping additional plots with open-top chambers (OTCs) that caused a passive warming on average of ~ 1 °C and differential air warming of ~ 6 °C at midday full sun over the study years. Warming significantly enhanced shrub growth and the CO2 sink function of the drained hummocks (exceeding the cumulative respiration losses in hollows induced by the lowered water level × warming). There was an interaction of water level with warming across hummocks that resulted in the largest net CO2 uptake at the warmed drained hummocks. Thus in 2013, the warming treatment enhanced the sink function of the control site by 13 g m−2, reduced the source function of the experimental by 10 g m−2 and significantly enhanced the sink function of the drained site by 73 g m−2. Therefore, drying and warming in continental bogs is expected to initially accelerate CO2–C losses via ecosystem respiration, but persistent drought and warming is expected to restore the peatland's original CO2–C sink function as a result of the shifts in vegetation composition and productivity between the microforms and increased NPP of trees over time.