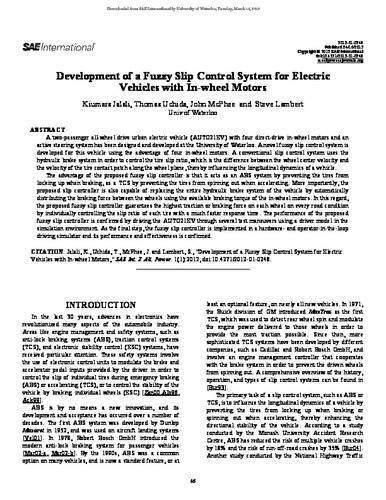 A two-passenger all-wheel drive urban electric vehicle (AUTO21EV) with four direct-drive in-wheel motors and an active steering system has been designed and developed at the University of Waterloo. A novel fuzzy slip control system is developed for this vehicle using the advantage of four in-wheel motors. A conventional slip control system uses the hydraulic brake system in order to control the tire slip ratio, which is the difference between the wheel center velocity and the velocity of the tire contact patch along the wheel plane, thereby influencing the longitudinal dynamics of a vehicle. The advantage of the proposed fuzzy slip controller is that it acts as an ABS system by preventing the tires from locking up when braking, as a TCS by preventing the tires from spinning out when accelerating. More importantly, the proposed slip controller is also capable of replacing the entire hydraulic brake system of the vehicle by automatically distributing the braking force between the wheels using the available braking torque of the in-wheel motors. In this regard, the proposed fuzzy slip controller guarantees the highest traction or braking force on each wheel on every road condition by individually controlling the slip ratio of each tire with a much faster response time. The performance of the proposed fuzzy slip controller is confirmed by driving the AUTO21EV through several test maneuvers using a driver model in the simulation environment. As the final step, the fuzzy slip controller is implemented in a hardware- and operator-in-the-loop driving simulator and its performance and effectiveness is confirmed.