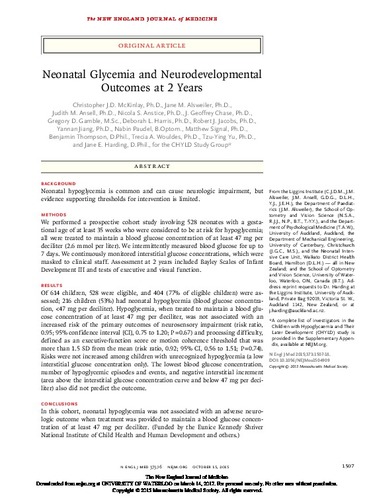 Neonatal hypoglycemia is a common and readily treatable risk factor for neurologic impairment in children. Although associations between prolonged symptomatic neonatal hypoglycemia and brain injury are well established,1 the effect of milder hypoglycemia on neurologic development is uncertain.2 Consequently, large numbers of newborns are screened and treated for low blood glucose concentrations, which involves heel-stick blood tests, substantial costs, and the possibility of iatrogenic harm. Under current guidelines,3 up to 30% of neonates are considered to be at risk for hypoglycemia, 15% receive a diagnosis of hypoglycemia, and approximately 10% require admission to a neonatal intensive care unit,4 costing an estimated $2.1 billion annually in the United States alone.5 Associated formula feeding and possible separation of mother and baby reduce breast-feeding rates,6 with potentially adverse effects on broader infant health and development. In addition, pain-induced stress in neonates, such as repeated heel sticks, may itself impair brain development.7 Thus, to determine appropriate glycemic thresholds for treatment, there have been repeated calls for studies of the effect of neonatal hypoglycemia on long-term development.2,8 We report the results of the Children with Hypoglycaemia and Their Later Development (CHYLD) study, a large prospective cohort study of term and late-preterm neonates born at risk for hypoglycemia. The study investigated the relation between the duration, frequency, and severity of low glucose concentrations in the neonatal period and neuropsychological development at 2 years.