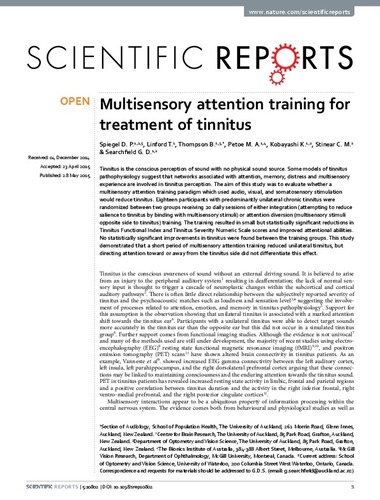 Tinnitus is the conscious perception of sound with no physical sound source. Some models of tinnitus pathophysiology suggest that networks associated with attention, memory, distress and multisensory experience are involved in tinnitus perception. The aim of this study was to evaluate whether a multisensory attention training paradigm which used audio, visual, and somatosensory stimulation would reduce tinnitus. Eighteen participants with predominantly unilateral chronic tinnitus were randomized between two groups receiving 20 daily sessions of either integration (attempting to reduce salience to tinnitus by binding with multisensory stimuli) or attention diversion (multisensory stimuli opposite side to tinnitus) training. The training resulted in small but statistically significant reductions in Tinnitus Functional Index and Tinnitus Severity Numeric Scale scores and improved attentional abilities. No statistically significant improvements in tinnitus were found between the training groups. This study demonstrated that a short period of multisensory attention training reduced unilateral tinnitus, but directing attention toward or away from the tinnitus side did not differentiate this effect.