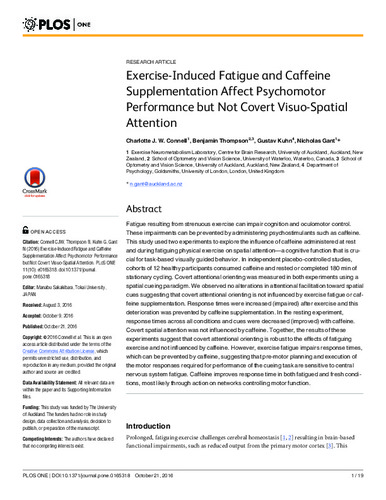 Fatigue resulting from strenuous exercise can impair cognition and oculomotor control. These impairments can be prevented by administering psychostimulants such as caffeine. This study used two experiments to explore the influence of caffeine administered at rest and during fatiguing physical exercise on spatial attention—a cognitive function that is crucial for task-based visually guided behavior. In independent placebo-controlled studies, cohorts of 12 healthy participants consumed caffeine and rested or completed 180 min of stationary cycling. Covert attentional orienting was measured in both experiments using a spatial cueing paradigm. We observed no alterations in attentional facilitation toward spatial cues suggesting that covert attentional orienting is not influenced by exercise fatigue or caffeine supplementation. Response times were increased (impaired) after exercise and this deterioration was prevented by caffeine supplementation. In the resting experiment, response times across all conditions and cues were decreased (improved) with caffeine. Covert spatial attention was not influenced by caffeine. Together, the results of these experiments suggest that covert attentional orienting is robust to the effects of fatiguing exercise and not influenced by caffeine. However, exercise fatigue impairs response times, which can be prevented by caffeine, suggesting that pre-motor planning and execution of the motor responses required for performance of the cueing task are sensitive to central nervous system fatigue. Caffeine improves response time in both fatigued and fresh conditions, most likely through action on networks controlling motor function.