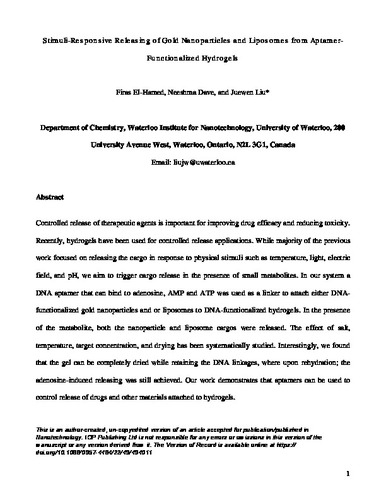 Controlled release of therapeutic agents is important for improving drug efficacy and reducing toxicity. Recently, hydrogels have been used for controlled release applications. While the majority of the previous work focused on releasing the cargo in response to physical stimuli such as temperature, light, electric field, and pH, we aim to trigger cargo release in the presence of small metabolites. In our system a DNA aptamer that can bind to adenosine, AMP, and ATP was used as a linker to attach either DNA-functionalized gold nanoparticles or liposomes to DNA-functionalized hydrogels. In the presence of the metabolite, both the nanoparticle and liposome cargos were released. The effect of salt, temperature, target concentration, and drying has been systematically studied. Interestingly, we found that the gel can be completely dried while retaining the DNA linkages and adenosine induced release was still achieved after rehydration. Our work demonstrates that aptamers can be used to control the release of drugs and other materials attached to hydrogels.