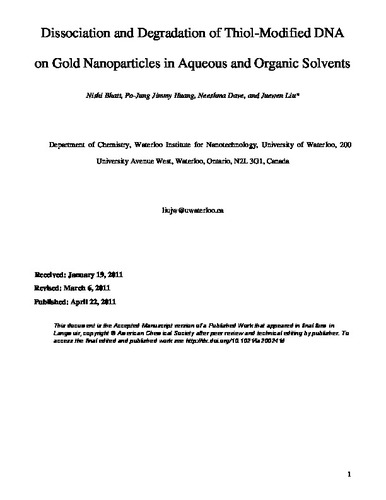 Gold nanoparticles functionalized with thiol-modified DNA have been widely used in making various nanostructures, colorimetric biosensors, and drug delivery vehicles. Over the past 15 years, significant progress has been made to improve the stability of such functionalized nanoparticles. The stability of the gold–thiol bond in this system, however, has not been studied in a systematic manner. Most information on the gold–thiol bond was obtained from the study of self-assembled monolayers (SAMs). In this study, we employed two fluorophore-labeled and thiol-modified DNAs. The long-term stability of the thiol–gold bond as a function of time, salt, temperature, pH, and organic solvent has been studied. We found that the bond spontaneously dissociated under all tested conditions. The dissociation was favored at high salt, high pH, and high temperature, and little DNA degradation was observed in our system. Most organic solvents showed a moderate protection effect on the gold–thiol bond. The stability of the gold–thiol bond in the DNA system was also compared with that in SAMs. While there are many similarities, we also observed opposite trends for the salt and ethanol effect. This study suggests that the purified DNA-functionalized gold nanoparticles should be freshly prepared and used in a day or two. Long-term storage should be carried out at relatively low temperature in low salt and slightly acidic buffers.