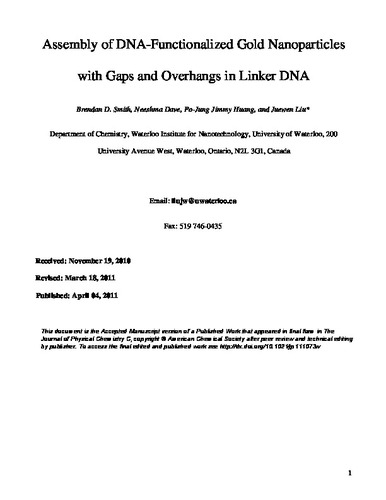 DNA-directed assembly of gold nanoparticles (AuNPs) has been extensively studied because of its important applications in analytical chemistry, materials science, and nanomedicine. In a typical system, two DNA-functionalized AuNPs are assembled via a linker DNA to form large aggregates. In the majority of the previous reports, the linker DNA is fully base paired with no gaps or overhangs present. Introducing such nonbase-paired regions in the linker DNA has been recently shown to be important for making stimuli-responsive materials and in crystallization of such AuNPs. In this work, we systematically studied the effect of introducing gaps and overhangs in the linker DNA to understand the kinetics of assembly and the melting transition of these aggregates. We found that the assembly kinetics decreased with increasing linker DNA length. The melting temperature decreased with the loss of base stacking by introducing gaps as well as the steric effect of overhangs. Additional insights were obtained by measuring the melting curves of the free DNAs in the absence of AuNPs. For example, it appeared that DNA base stacking at the nick site was favored in assembled nanoparticles compared to that in free DNA. Our results indicate that, while it is possible to form AuNP assemblies with linker DNAs containing various types of unpaired regions, these kinetic and thermodynamic factors need to be considered when designing related sensors and materials.