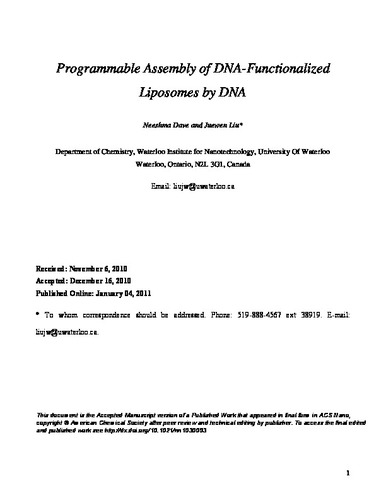 Bionanotechnology involves the use of biomolecules to control both the structure and property of nanomaterials. One of the most studied examples is DNA-directed assembly of inorganic nanoparticles such as gold nanoparticles (AuNPs). However, systematic studies on DNA-linked soft nanoparticles, such as liposomes, are still lacking. We herein report the programmable assembly and systematic characterization of DNA-linked liposomes as a function of liposome size, charge, fluidity, composition, DNA spacer, linker DNA sequence, and salt concentration for direct comparison to DNA-directed assembly of AuNPs. Similar to the assemblies of AuNPs, sharp melting transitions were observed for liposomes where the first derivative of the melting curve full width at half-maximum (fwhm) is equal to or less than 1 °C for all of the tested liposomes, allowing sequence specific DNA detection. We found that parameters such as liposome size, charge, and fluidity have little effect on the DNA melting temperature. Cryo-TEM studies showed that programmable assemblies can be obtained and that the majority of the liposomes maintained a spherical shape in the assembled state. While liposome and AuNP systems are similar in many aspects, there are also important differences that can be explained by their respective physical properties.