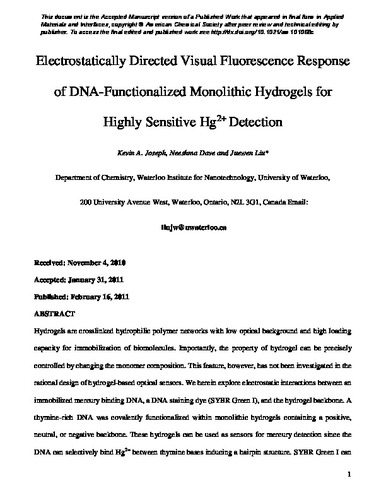 Hydrogels are cross-linked hydrophilic polymer networks with low optical background and high loading capacity for immobilization of biomolecules. Importantly, the property of hydrogel can be precisely controlled by changing the monomer composition. This feature, however, has not been investigated in the rational design of hydrogel-based optical sensors. We herein explore electrostatic interactions between an immobilized mercury binding DNA, a DNA staining dye (SYBR Green I), and the hydrogel backbone. A thymine-rich DNA was covalently functionalized within monolithic hydrogels containing a positive, neutral, or negative backbone. These hydrogels can be used as sensors for mercury detection since the DNA can selectively bind Hg2+ between thymine bases inducing a hairpin structure. SYBR Green I can then bind to the hairpin to emit green fluorescence. For the neutral or negatively charged gels, addition of the dye in the absence of Hg2+ resulted in intense yellow background fluorescence, which was attributed to SYBR Green I binding to the unfolded DNA. We found that, by introducing 20% positively charged allylamine monomer, the background fluorescence was significantly reduced. This was attributed to the repulsion between positively charged SYBR Green I by the gel matrix as well as the strong binding between the DNA and the gel backbone. The signal-to-background ratio and detection limit was, respectively, improved by 6- and 9-fold using the cationic gel instead of neutral polyacrylamide gel. This study helps understand the electrostatic interaction within hydrogels, showing that hydrogels can not only serve as a high capacity matrix for sensor immobilization but also can actively influence the interaction between involved molecules.