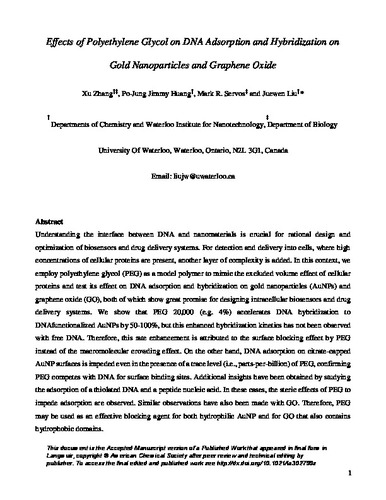 Understanding the interface between DNA and nanomaterials is crucial for rational design and optimization of biosensors and drug delivery systems. For detection and delivery into cells, where high concentrations of cellular proteins are present, another layer of complexity is added. In this context, we employ polyethylene glycol (PEG) as a model polymer to mimic the excluded volume effect of cellular proteins and to test its effects on DNA adsorption and hybridization on gold nanoparticles (AuNPs) and graphene oxide (GO), both of which show great promise for designing intracellular biosensors and drug delivery systems. We show that PEG 20000 (e.g., 4%) accelerates DNA hybridization to DNA-functionalized AuNPs by 50–100%, but this enhanced hybridization kinetics has not been observed with free DNA. Therefore, this rate enhancement is attributed to the surface blocking effect by PEG instead of the macromolecular crowding effect. On the other hand, DNA adsorption on citrate-capped AuNP surfaces is impeded even in the presence of a trace level (i.e., parts per billion) of PEG, confirming PEG competes with DNA for surface binding sites. Additional insights have been obtained by studying the adsorption of a thiolated DNA and a peptide nucleic acid. In these cases, the steric effects of PEG to impede adsorption are observed. Similar observations have also been made with GO. Therefore, PEG may be used as an effective blocking agent for both hydrophilic AuNP and for GO that also contains hydrophobic domains.