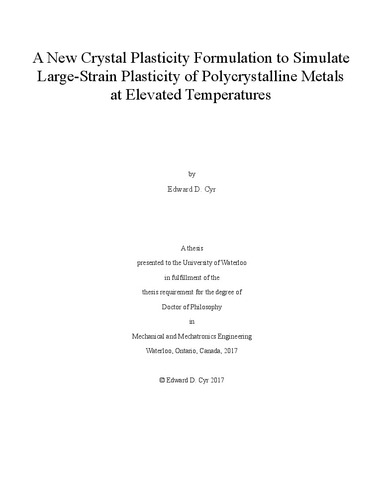 This dissertation explores the plasticity polycrystalline metals, with particular attention paid to aluminum and its alloys. Specifically aluminum Al-Mg sheet alloys, which are currently replacing steel parts for panel and some structural componentry in the automotive industry. At the forefront of this transition, is the problem of poor room-temperature formability of the aluminum sheet when compared to its steel counterparts. A promising solution to this has been the use of warm-forming to increase formability, preventing redesign of automotive parts from steel to aluminum (Li and Ghosh, 2003). In this thesis, a new constitutive framework and methodology is developed to accurately model elevated temperature behaviour of polycrystalline aluminum. This study describes a picture of the physics behind slip dominated deformation in polycrystalline metals, and the mechanical characterization techniques used to determine modeling parameters for crystal plasticity. A review on modeling techniques and published work on the versatility of crystal plasticity theory and application is also presented. An initial model is then developed for a fully temperature dependent crystal plasticity framework. The model employs a generic hardening law to study the effect of temperature on material hardening, and conclusions are made on the lack of microstructural correlation between the model and physical behaviour of the material. The same framework is then implemented in the well known Marciniak-Kuzynski (1967) based limit strain formulation as an application study with Chang and Asaro (1981) type hardening. Temperature dependency is studied and formability is predicted for different aluminum alloys. The study reveals that, again, phenomenological-based hardening is only satisfactory for predicting elevated-temperature behaviour, and results are very sensitive to model input parameters. In the second half of this dissertation, a physical model is carefully developed from fundamental dislocation theories. The model is formulated on the basis of accumulation of dislocations as the dominating strengthening mechanism in polycrystals, introduces recovery as a thermally activated process leading to temperature dependent softening. The model is used to study temperature dependency of slip deformation in pure aluminum, and the correlation between physical processes and model parameters. The model is able to capture and predict deformation response, as well as suggest explanation to the influence of temperature on microstructural behaviour. Finally, the model is applied to study the temperature dependency of microstructural parameters in 5xxx series Al-Mg sheet alloys. Experimental data is used to characterized material parameters at warm forming temperatures, and the model is used to predict stress-strain response. The model is then used to discuss the effect of temperature on two different alloys and suggests explanation on the microstructural causes leading to variation hardening behaviour between the two alloys over the temperature range studied. The work then concludes the improvement of model predictability, and the utility of such a model in microstructural design.