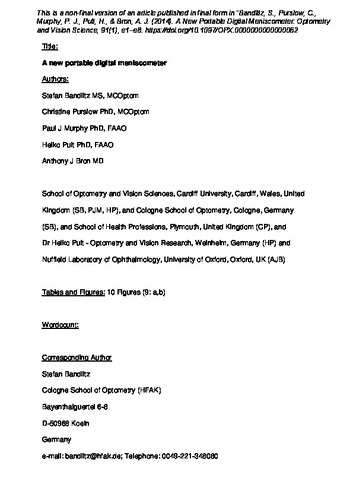 Purpose: The aims of this study were (i) to develop a new portable slit-lamp mounted digital meniscometer (PDM) and (ii) to test its accuracy and repeatability compared to the existing Yokoi et al. videomeniscometer (VM). Methods: We developed a novel application for an iPod or iPhone, which created an illuminated target of parallel black and white bands. This was used as a portable device with which to perform reflective meniscometry. The medians of three consecutive measurements on five glass capillaries (internal radii, 0.100 to 0.505 mm) were compared between VM and PDM at two different sessions. Also, the central lower tear meniscus radius (TMR) in 20 normal subjects (10 males and 10 females; mean [SD] age, 32.3 [9.3] years) was measured using both techniques. Correlations between the instruments were analyzed using the Pearson coefficient. Differences between sessions and instruments were analyzed using Bland-Altman plots, coefficient of repeatability, and paired t-tests. Results: The PDM and VM were accurate in vitro (95% confidence interval [CI] of difference: PDM -0.0134 to +0.0074 mm, p = 0.468; VM -0.0282 to + 0.0226 mm; p = 0.775) and reproducible between sessions (95% coefficient of repeatability, 0.019 and 0.018, respectively). The mean difference between the PDM and VM in vitro was 0.0002 mm (95% CI, -0.0252 to + 0.0256; p = 0.984). In human subjects, mean (SD) TMR measured with the PDM (0.34 [0.10] mm) and VM (0.36 [0.11] mm) was significantly correlated (r = 0.940; p < 0.001), and there was no statistically significant difference between the measured TMR of the instruments (p = 0.124). Conclusions: This new slit-lamp mounted digital meniscometer produces accurate and reliable measurements and provides similar values for tear meniscus radius, in human studies, to the existing VM. The instrument is suitable for use in both research and clinical practice.