The Relationship between Tear Meniscus Regularity and Conjunctival Folds 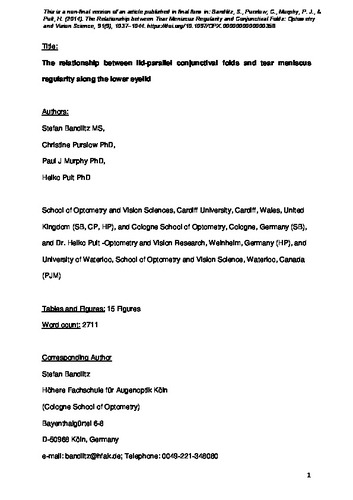 Purpose: To investigate the capability of a new portable digital meniscometer (PDM) to measure tear meniscus radius (TMR) and tear meniscus height (TMH) at different locations along the lower lid and to evaluate relationships between tear meniscus regularity and the degree of lid-parallel conjunctival folds (LIPCOFs). Methods: Using the PDM, the TMR and TMH of 42 subjects were measured at three locations along the lower lid of one eye: central, perpendicularly below the pupil center (TMR-C, TMH-C), and temporal (TMR-T, TMH-T) and nasal (TMR-N, TMH-N), perpendicularly below the limbus. Nasal and temporal LIPCOF grades were recorded. Correlations between the measurements were analyzed using the Pearson coefficient (or Spearman rank in nonparametric data), and the differences were evaluated by paired t tests or analysis of variance and post hoc Fisher least significant difference test. Results: Temporal TMR was 0.041 mm flatter (p = 0.002) and TMH-T was 0.063 mm higher (p < 0.001), whereas TMR-N was 0.026 mm flatter (p = 0.038) and TMH-N was 0.046 mm higher (p < 0.001) than TMR-C and TMH-C. Temporal LIPCOF grades were significantly correlated to temporal alterations in TMH (r = 0.590; p < 0.001) and TMR (r = 0.530; p < 0.001), and nasal LIPCOF grades were significantly correlated to nasal alterations in TMH (r = 0.492; p = 0.001) and TMR (r = 0.350; p = 0.023). Conclusions: The PDM is able to noninvasively detect significant differences in TMR and TMH along the lower lid. The flatter TMR and higher TMH at the nasal and temporal locations are associated with increased LIPCOF. Because increased LIPCOF scores may affect tear film disruption along the lower lid, measuring TMR and TMH at the central position below the pupil may provide the best intersubject reliability.